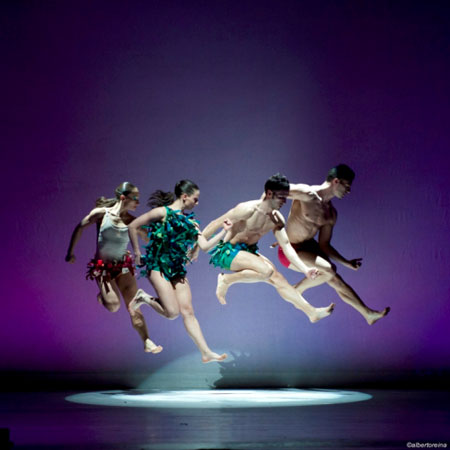 REASONS TO BOOK
Internationally renowned for its amazingly spectacular productions
Fusion of dance, athleticism, acrobatics, mime, humour and sounds
Combining a new spin on mixing contemporary dance, with physical theatre
Performed for Pope John Paul II and at the Sydney Olympics
Based in Italy and available to perform at events worldwide
Dancers, Dance Shows, Acrobatic Dance, Cabaret and Stage Shows

This Italian Dance Theatre company has a high International reputation for its artistic expertise and amazingly spectacular productions.  Thanks to the unmistakable and spectacular fusion of dance, athleticism, acrobatics, mime, humour, sounds, lights and costumes, their productions have the power of compose surreal scenarios, to create illusions, and challenge the imagination, transcending all cultural, linguistic and generational boundaries.

Important events in which the company has taken part include: the performance before Pope John Paul II in St. Peter s Square for the 18th World Youth Day, the Sydney Olympics, the 2006 Turin Olympic Games Opening Ceremony, the Edinburgh Fringe Festival, the Hong Kong New Years Day celebrations, the 60th Anniversary of the Sicilian Regional Assembly, officially representing Italy at the Peking Cultural Olympics at the request of the Chinese Ministry of Culture and the Beijing Olympic Games Committee and under the patronage of the Italian Ministry of Foreign Affairs, the Italian Cultural Institute and the Italian Embassy.

Their latest production marks the beginning of a new creative season for the most appreciated physical theatre ensemble in the Italian scene. Puzzle is a choral and polyhedric composition, realized by the union of memorable and well-known choreographies of the past and new choreographies for the first time created by the dancers themselves that during these years have given their contribution in the improvement of the show.

Thanks to the variety and diversity of expression, passing through theatre, dance and even the acrobatics, it is possible for this act to fully give expression to the various artists' competences. This performance is seen as an open and free space, a way to let the spectator come into contact with the passion and the creativity of the group and to let him/her understand together with the company the effect of a perfect composition, where every piece finds its place.

Need more information about this act? Contact one of our entertainment specalists who will be happy to assist you.