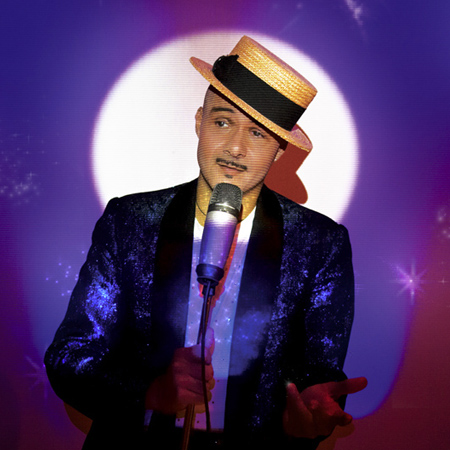 REASONS TO BOOK
Known as Italy’s first and most original “virtual magician"
A spectacular flying illusion in a fabulous, magical world
His shows include a mix of magic, comedy, singing and tap dance
Has performed on “Italia’s Got Talent” and other national TV programs
Based in Naples, Italy and available to perform at events worldwide
Latest Technology Acts, Magic Stage Show, Digital Magic, Talent and TV Show Personalities, TV Show Talent Acts, Digital Magician, Illusionist, Magic and Illusion

An international, virtual and close-up, Italian Magician act that mixes magic, theatre and surrealism. A spectacular flying illusion in a fabulous world!

Magritte is an original and an unusual artist: he plays a complete show for all ages. He has been often on the scene of TV shows, and engaged by famous casino, comedy clubs, international hotels and exclusive parties.

In his show there is a mix of magic, comedy, singing and tap dance! The audience becomes the main character either of an exciting strip-tease, or the main actress of magic hard-movie! "New York New York", "Singin' in the rain", "Cabaret" are all live performances, accompanied by magic effects.

The whole exciting experiments of mental magic have had a big success thanks to the participation of the audience! Elite has become the first Italian "virtual magician", after his attendance at "Italia's Gto Talent" 2011, and at "Punto su di te", on 1st national TV Raiuno. He performed for the first time "The Video Magic Act", in which he synchronises videos and computer-graphics.

" Elite is a complete showman. "

" You are the best magician I have never seen. "

" Compliments for theatricalism of your magic show. "

" Your ability is incredible! "

" Your act is absolutely original. "