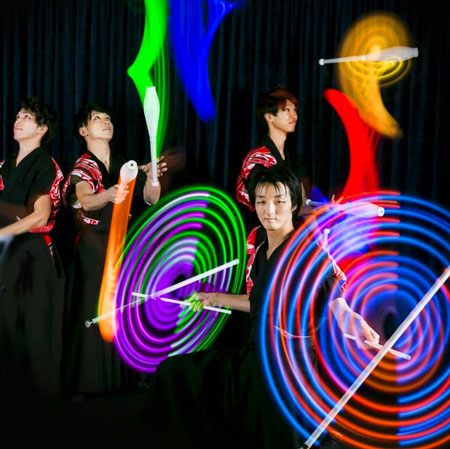 REASONS TO BOOK
Amazing and mesmerising LED jugglers with a fascinating light show
They use multiple props such as clubs, balls, poi and diabolo
Customisable performance can include branding or logos
Founded by a former Cirque Du Soleil performer
Based in Nagoya, near Kyoto and available internationally
Brand Reveal Entertainment, UV Glow,LED and Laser Show, Laser and LED Poi, Circus Entertainment, Juggling and Diablo Act, Cabaret and Stage Shows

Amaze your guests with a totally mesmerising light show from our hugely talented Japanese LED jugglers. This variation on circus entertainment is visually captivating and the colourful display is a guaranteed head turner.

Far more than just a regular stage show, the Japanese LED jugglers have choreographed an incredible routine which they perform to backing tracks and the speed of the props combined with the ever changing colours is a completely spellbinding experience. The world class jugglers have put a modern twist on old fashioned circus entertainment by including LED.

This exciting light show includes a variety of eye catching LED props such as the classic clubs, balls, batons, diabolo and LED poi. When performed in the proper dark conditions the light show really comes to life and transforms into a totally unique experience where the spectator will forget they are watching jugglers. The LED Jugglers’s props are flawlessly synced so that you receive outstanding colour changes from unified to multi colour as they perform.

Our Japanese LED jugglers with four to eight performers, and are willing to customise their routine and create a light show tailored to your event or needs. There LED poi can be easily modified in include company branding or logos. Which will be a fantastic option from brand or product launches.

The collective of Japanese LED Jugglers is formed by a former member of the iconic Cirque Du Soleil and amongst themselves have years of experience providing this type of circus entertainment. This also includes the Japanese record for ball juggling, a street performer in the Shizuoka World Cup, shows on luxury cruise ships and the LED jugglers have featured on several TV shows.

Get in touch if you would like to book the Japanese LED jugglers to provide your event with fascinating circus entertainment with a twist.