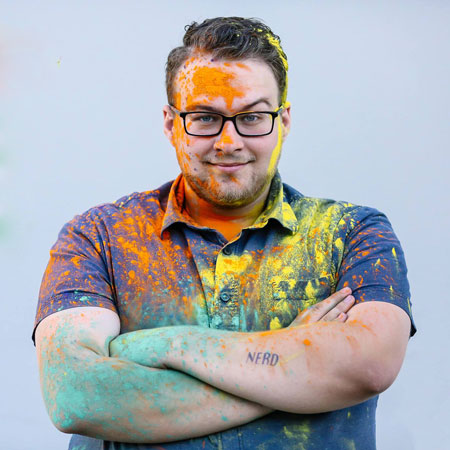 REASONS TO BOOK
A Las Vegas illusionist who performs outstanding illusions in addition to close up sleight of hand tricks that offer a new twist on classic magic
A magician who has redefined the nerd status, our illusionist has created a unique and ever expanding social media following
Has performed on TV shows such as The Tonight Show, Wizard Wars, Fool Us and many more
Voted one of the Most Interesting People in Las Vegas by Seven Magazine
Based in Las Vegas and available for worldwide bookings
Comedy Magician, Magic and Illusion, Magic Stage Show, Talent and TV Show Personalities, Close up Magician, TV Show Talent Acts, Illusionist

A Las Vegas illusionist who has taken the world of magic by storm, this magician emits nothing by charisma and charm every time he steps onto the stage. With a hilarious comedic quality to his performance, our illusionist wins over the crowd time and time again. Performing mind blowing illusions and close up sleight of hand this magic act boasts an elaborate and new twist on classic magic that impresses even the most sceptical of audience members.

An illusionist who has made many TV appearances over his career, Kyle has performed his magic act on TV shows such as The Tonight Show, Wizard Wars, Fool Us, Don’t Blink and many more!

Capitalising on the ‘nerd’ label, Kyle has taken this new trend and made it unique to him – adding another element of his personality to his performance that is hugely effective with his audiences. With an infectious comedic deadpan this loveable performer impresses viewers in the audience as well as in the street and on camera.

Whether he’s performing one on one with celebrities, creating a viral video with the latest Vine star or performing spontaneously to crowds in the street, our Las Vegas illusionist commands all eyes on him as he confidently blows the minds of all who witness his close up magic and grand illusion.

With an ever growing following on social media, Kyle has conceived and designed some of the most memorable illusions in Las Vegas as well as taking to Broadway and London’s West End, movies and television. Delivering dynamic and dazzling tricks and illusions, Kyle was voted one of the Most Interesting People in Las Vegas by Seven Magazine and continues to impress industry experts worldwide.

To book our brilliant Las Vegas illusionist or for more information, contact our Entertainment Specialists today.