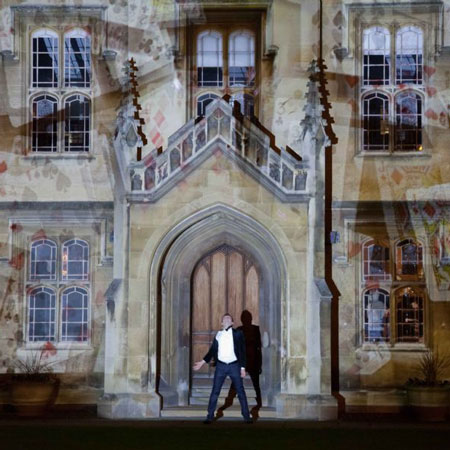 REASONS TO BOOK
Outstanding video mapping magician leaves audiences speechless as his magic projection show takes magic to the next level
A magic act that is exciting, different and captivating to witness
Cinema, theatre and magic have merged together to produce a revolutionary magic act
Our illusionist and his team have broken Guinness World Records for the largest card illusion reveal
Based in Italy, Cambridge and China throughout the year and available for worldwide bookings
Magic and Illusion, Building Mapping And Car Mapping, Digital Magic, Latest Technology Acts, Brand Reveal Entertainment, Unique Brand Reveal Acts, Digital Magician, Illusionist

How would you feel about a show that encompasses cinema, theatre and magic? Our outstanding magician takes video mapping to the next level as he performs his magic act on a large scale, breaking artistic barriers and creating a truly magnificent form of art and magic. An illusionist who blurs the boundaries of the physical world and digital world can make objects pass between the two realms captivating audiences all across the globe with his magic projection.

A team who currently hold the Guinness World Record for the Largest Card Illusion Reveal as part of the first light mob in history astound audiences and create magnificent magic projection displays.

Whether you want your event to go down in history by opting to have Alexis attempt another world record during his magic act or if you wish to captivate audiences from far and wide with spontaneous video mapping light shows that can take place in the hustle and bustle of your town or city to generate maximum publicity and chatter then our magician can certainly exceed your expectations.

In addition to being a part of a world record attempt and light mob our magic team also film your magic projection to create a professional viral video for people to share and show the world how innovative your brand or event is, boosting your social media success in no time. A video mapping magic act that can also showcase products within the show to advertise to create an extremely dynamic advertising tool when coupled with the viral video.

An engaging magic projection show that shows our magician interacting with the projected animations in a way that breaks the barriers between the physical and digital worlds, creating a surreal magic act that captivates viewers. Our illusionist bases each and every show on the facades that temporarily become the screens for these magical marvels with frequent themes being inspired by the history of the building or surrounding areas.

To bring your town or city to life with mesmerising magic projections and illusions or to stimulate chatter online about your event, brand or product, hire our world record breaking video mapping team and magician to bring your vision to life.

To book our incredible illusionist and his video mapping act contact our Entertainment Specialists, or to see our magician in his other magical works visit our Big Stage Show page.