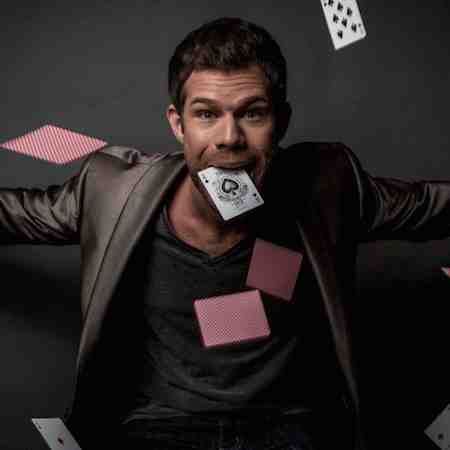 Merging the power of music with the captivating art of magic, our rock n roll magician spellbinds audiences in ways never conceived. While the general public associates magic with sequins, blow-dried hair, and rigged box tricks; our amazing stage and close-up magician amazes audiences in a no-nonsense fashion with original feats of the impossible utilizing familiar objects like iPads and guitars as props. In some cases, he’s merely feet away from his audience, making the magic more believable as show-goers literally become part of the performance. This brilliant magic stage show is backed to a diverse soundtrack featuring the clanging guitars of THE STROKES or the melodic wispiness of THE SHINS; music and magic become one in this ground-breaking live magic stage experience.

Based in the entertainment capital of the world, our Los Angeles magician has an impressive track record as FOX, Bravo TV, Nashville Film Festival, NBC, Hard Rock Cafe and Blue Moon Entertainment count among his previous clients. Book our magician today and you will be in good hands as he has also performed on The Ryan Seacrest Show amongst others! Happy to work with clients to customize performances to meet their needs, our incredible magician will bring audiences to their knees.

Not only a brilliant stage performer, book our magician to WOW your guests with amazing close-up magic tricks! Ask our Entertainment Specialists for more information.

" ...he demonstrated a level of maturity and a performer's style beyond his years. With total confidence and with the professionalism of an experienced performer, he performed several tricks...The trustees were engaged and responsive to his words and tricks... his performance was well received by a relatively tough audience. "

" He's got a great future as a top contender in magic "

" A dedicated student of magic "