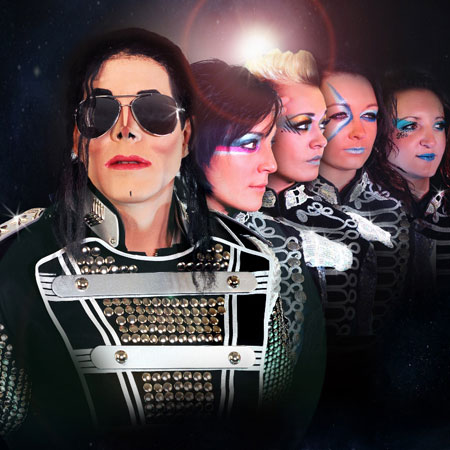 REASONS TO BOOK
Singing 100% LIVE throughout the show as MIchael Jackson
Performed in Dubai, India, Europe, Mexico and in front of 30,000+ audience
Invited to perform live for Michael Jackson himself in 2003 in LA
Show available as a Solo, with Dancers or with a LIVE band
Available to perform Worldwide
Michael Jackson, Tribute, Lookalikes and Impersonators

This is the ultimate tribute to Michael Jackson, setting the industry alight and selling out venues wherever they go. The show has become one of the most in demand tribute shows in the country and is fast becoming THE number one Michael Jackson show to see!

In the past three years this tribute has performed in countries such as Dubai, India, Crete, Turkey, Spain, Mexico, Egypt and Tenerife as well as Nationwide across the UK. Some of their key performances include headlining The McDowell Signature Indian Derby (30,000 in attendance, live national TV coverage on multiple stations), headlining Gay Pride in Sitges, Barcelona (20,000 in attendance) and headlining Music On The Moor in Hertfordshire (15,000 in attendance). They regularly perform for many leading brands, companies and chains including Butlins, Thompson Sensatori, First Choice, G Casino, Pontins, Haven and Park Resorts to name but a few.

This act pays true homage to the late great King Of Pop. Singing 100% live lead vocal, his voice replicates the distinctive tones of Jackson – you could be forgiven for believing he mimes! His dancing mirrors the legend in every detail, step for step right down to the smallest of mannerisms and his look (created through a two hour process using ONLY theatrical make-up) is the exact image of MJ. He has spent the past 13 years studying Michael Jackson in meticulous detail to produce the closest complete likeness currently performing today.

Robin has been a long time fan and learnt to replicate Michael's abilities through a love of performing. His dedication paid off in a big way when he got to live a dream and performed for Michael Jackson in 2003 at his 45th Birthday show at the Orpheum Theatre in L.A....an honour only a very select few have experienced!

The show features a full production including a live 3-piece band accompanied by an epic click track. The musicians are of the highest standard and have supported acts such as Beyonce, Katy Perry, The Script and Mamma Mia to name a few. Lead by the show Music Director and lead guitarist Lee Turner, together they have recreated the unmistakeable hits of MJ whilst staying true to the original sound and have given them a fresh feel for the new millennium.

The MJ tribute is available with an amazing all girl dance team. The girls perform the classic world-famous routines whilst adding a little something extra for the modern age of music. They are simply electrifying!

With wonderful touches of originality, visual extravagance throughout and a set list for all ages, (whether a fan or not) this is truly a show for everyone.

" The Milton Keynes Masked Ball is not your usual charity ball, it's billed as "the ball that rocks". The event is all about live music and has a national reputation for showcasing new, up-coming acts. This year we really struck gold by booking the Michael Jackson Tribute. We heard on the grapevine that they were a great act, but not wanting to take anyone's word for it we went along to one of their performances to see for ourselves... we were blown away and snapped them up immediately. Their performance at The Milton Keynes Masked Ball was nothing less than spectacular and without doubt the highlight of the evening. This tribute act has a very rare gift, not only does he look and dance like Michael Jackson on stage brilliantly, he also sings live throughout the performance, something that other tribute acts simply couldn't do. This in itself is incredibly impressive, but add the fantastic dancers, the lights and the pure energy that he generates on stage and you have a package that just can't be beaten! "