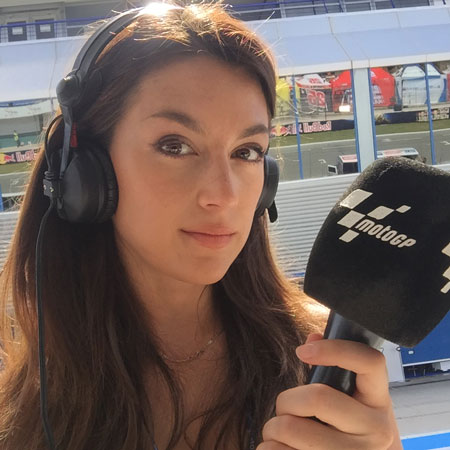 Our Multilingual Sports Presenter is an all-around sport and extreme sports presenter, fluent in five languages including English, Brazilian Portuguese, Italian, Spanish and French. This leading female motorsport presenter is fearless and has interviewed many high-end celebrities including the six-time winner of the World Surf League Kelly Slater and Formula 1 Champion Nico Rosberg.

With a vast amount of experience in presenting TV programs across the globe, this Multilingual Sports Presenter is now positioned as Red Bull TV's leading lady for presenting Moto GP across the Rookies Cup and covering golfing events on Sky Sports where she has been known to take to the golf course and show some of the professionals her long-range drive.

Our female TV presenter has hosted corporate events and interviewed at award ceremonies such as The Laureus World Sports Awards where she feels equally confident, and now receives extensive bookings for corporate dinners and award celebrations.

If you would like to book our female extreme sports presenter then please get in touch with one of the Scarlett Entertainment team who will take you through the speakers booking process.

" She is the epitome of a team player. She came into a well-established group and has proven herself to be a valuable addition. her presenting; like her character, is energetic, enthusiastic and professional. She learns about the sport she is involved in and takes it upon herself to come up with ideas and innovations. She would be a great asset to any production. "