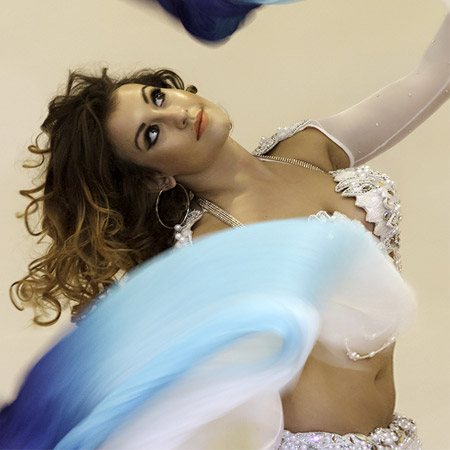 Captavating audiences all over the world, our Professional Belly Dancer is a born entertainer. A premier international belly dancer, she will provide your event with earthquake-like shimmies, jaw dropping udulations, fluid snake-like hip movements and hypnotizing choreographies.

Having danced throughout the UK, Australia, Singapore, Morocco, Egype and Lebanon, her performances display everything from earthy North African and Middle Eastern folklore to elegant classical pieces or even more modern cabaret styles. She can tailor dances to specific event themes so that your guests have witnessed the best in belly dancing entertainment.

With years of performing experience her act is gauranteed to make your event unforgettable. With a deep understanding and knowledge of how to bring the best of stunning, cultural Arabic entertainment to any event, whether its a zaffe bridal entrance with belly dancers and live drummers, or a dynamic solo belly dance she will be able to create a fully choreographed stage performance bespoke to your event.

If you're interested in hearing more about our Professional Belly Dancer or would like to enquire for a tailored quote for your event make an enquiry today.

" She has it all! Sparkling costumes, bewitching dance moves, fast paced changes, and her own fresh style of DnB belly dancing. The show was thoroughly enjoyed by everyone in the crowd, while drawing in spectators from nearby marquees. Zooey was a pleasure to work with, and not only extremely professional, but very personable and a lovely addition to the team. I would definitely book her agan, and look forward to working with her in the very near future. "

" Zooey was a wonderful addition to our occasion. Her mixture of exotic and beautifully delivered belly dance, glamour, beauty and fun added a fabulous twist which everyone loved. My guests still talk about the mini belly dancing workshop they participated in which was a huge hit and which was also much enjoyed by the spectators too! I would highly recommend Zooey to add something a bit different and some sparkle to any occasion. "

" I have booked her for several events and would certainly recommend her. She is talented and professional, she has a great look and is a real pleasure to work with. She would be an asset to any event. "