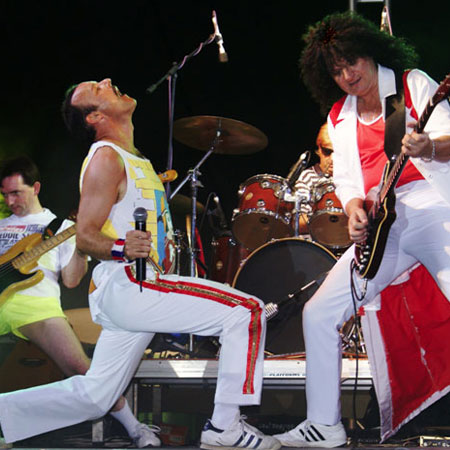 REASONS TO BOOK
Combines the musicianship, costumes & energy of rock band Queen
Performed internationally at football stadiums, festivals, theatres...
Described by Queen guitarist 'Brian May' as 'brilliant'
As seen on ITV's Queen Mania and the Charlotte Church Show
Based in London & available to perform at events worldwide
Queen and Freddie Mercury, Tribute, Lookalikes and Impersonators

Established in 1996, this tribute band re-enact the glory days of Queen including the Craziness of the 70’s and the Magic of the 80’s proving themselves to be the most dynamic and exciting Queen Tribute Band currently touring.

They have performed all over the UK, Europe and the World at football stadiums, festivals, theatres and other prestigious venues. The band in their majestic magnificence receive standing ovations in response to their electrifying representation of a Queen Live Concert.

Their high-energy two hour show with full Staging, Lighting, Backdrops and Pyrotechnics has earned them the reputation of being the World’s most exciting Queen Tribute act.

Their set list includes all the piano driven hit singles: Killer Queen; Somebody To Love; Don’t Stop Me Now; You’re My Best Friend; We Are The Champions and the amazing award winning Bohemian Rhapsody. These hits are balanced with the Guitar led anthems; Tie Your Mother Down; Hammer To Fall; One Vision; I Want It All; We Will Rock You and the Acoustic vocal tracks 39 and the unforgettable Love of my Life. The bands ability to recreate Queen live is something truly special.

" The best Queen tribute you will ever see "

" The best Queen tribute ever "

" Its not just magic, its heaven for everyone "

Jim Jenkins. Queen Biographer. Co-Author of; Queen as It Began.

" Could almost be the real thing "