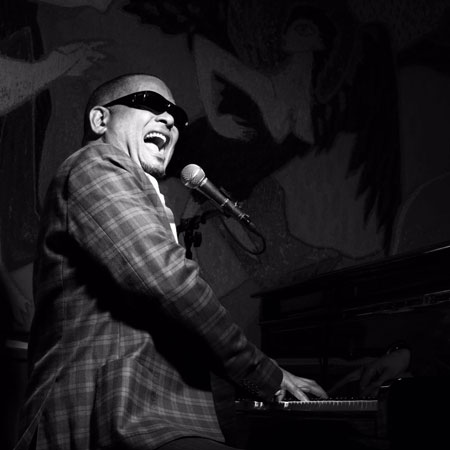 REASONS TO BOOK
A talented musician with many years of experience, this tribute is a spitting image Ray Charles lookalike
Playing Ray Charles’ best loved songs like My Babe, I Can’t Stop Loving You and Georgia On My Mind, this is the ultimate tribute to Ray Charles
Available with a piano playing Ray Charles impersonator, two female singers and optional additions of drums, sax, guitar and bass
The perfect tribute show for corporate functions, festivals, private parties and more
Hire Ray Charles Tribute for events in the South America and internationally
Tribute, Lookalikes and Impersonators, Other Tributes

Paying homage to one of the greatest musicians of all time, Ray Charles Tribute is an exceptional Ray Charles impersonator. Based in the South America and available to be booked for events across the globe, this tribute show celebrates the musical legacy of the late great legend. Our tribute to Ray Charles aims to authentically replicate the sounds and feeling of a real Ray Charles concert. Fronted by a Ray Charles lookalike whose voice and piano playing perfectly matches the real artist, this show also incorporates live instrumentals and backing singers.

Blind from the age of seven, Ray Charles, known to fellow musicians as Brother Ray, was a pioneering performer, creating the genre of soul music as we know it today. One of the first African American artists to be granted control of a record company, Ray Charles was a significant figure both within music and race politics. Heavily influenced by Nat King Cole, Ray’s music incorporates elements of country, blues and jazz. Described by Frank Sinatra as “the only true genius in show business”, it is no surprises that Charles’ legacy lives on today and continues to have a significant impact on modern musicians.

Performing a rich tribute to Ray Charles, our Ray Charles impersonator recreates everything from the vocal sound and instrumental performance that made Charles so popular, to the staging, lighting and atmosphere of a real show. Featuring a repertoire of Charles’ greatest hits including My Babe, I Can’t Stop Loving You and Georgia On My Mind, this tribute show is packed full of songs that audiences will want to sing along to.

A superb entertainment option for festivals, corporate functions and wedding receptions, whether you are Ray Charles’ biggest fan or simply love a bit of soul music, this tribute is ideal.

For more information about booking Ray Charles Tribute for your event, don’t hesitate to contact our team at Scarlett Entertainment today.