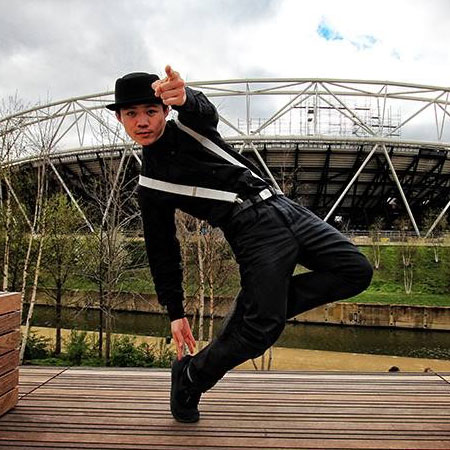 REASONS TO BOOK
Outstanding British and World Champion Street Dancer
He has developed a niche-ness in the UK dance community
Takes influences around him never trying to copy but to reinvent!
He reached the live semi-finals of “Britain’s Got Talent”
Based in London and available to play at events worldwide
Street Dancers and Break Dancers, TV Show Talent Acts, Talent and TV Show Personalities, Dancers

Street Dancer Kieran is a British and World Champion dancer who began at the age of 12, by emulating street dancers he watched on YouTube. A year later he joined a dance school where he was taught various styles which he perfected and added to his own choreography.

His first interest for dancing came from the illusions of popping like tutting, waving and animation and so he wanted to replicate that intense movement. With this mentality in mind to look “unreal” he has developed a niche-ness in the UK dance community and sees no boundary in the amount of styles a person can do.

Taking all the influences around him from video games to Manga he moulds it into his own, never trying to copy but to reinvent! This year Kieran entered the TV show Britain's Got Talent where he reached the Live Semi Finals and gained outstanding feedback from all four judges. Simon Cowell said he was one of the best dancers he had ever seen and called him a genius…Judge for yourselves!

Kieran can interact with an audience, which can be very amusing to watch guests trying to emulate Kieran's dance moves

" You absolutely blew our minds with that! "

" Out of this world!…It was faultless. "