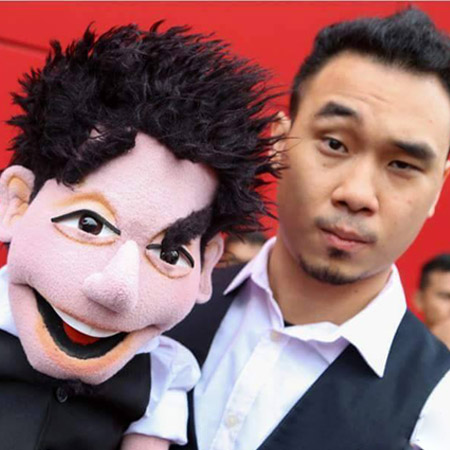 Book this sensational comedy ventriloquist for a hilarious and original magic act that will delight audiences everywhere. This superb ventriloquist magician will amaze audiences with his one of a kind magic and stand up comedy act that’s side-splitting and full of surprises. Our comedy ventriloquist creates a fantastic act where his puppet acts as the magician, delivering a range of clever and dazzling magic tricks in a hilarious comedic style that’s sure to get the whole audience laughing out loud. Our talented ventriloquist creates a range of hilarious and magical acts that have entertained audiences all over Asia as well as making a fantastic appearance on Asia’s Got Talent where he dazzled the audience and the judges alike. Book this fantastic puppet magician for a unique and brilliantly entertaining act of big scale magic from our small scale magician!

Our amazing comedy ventriloquist is the coolest and most original magic act in Asia and his quirky and endearing magic act has impressed audiences at events and parties all over Singapore and beyond. This ingenious ventriloquist magician is perfect for entertaining guests at corporate events, cabaret nights, stage shows and private parties. Previous clients include the HP Corporate Summit 2016, the CapitaLand 15th Anniversary Dinner and the prestigious Asia’s Top Outstanding Enterprise Awards 2015.

Our ventriloquist can offer a range of acts that combine genuine wow-factor magic with brilliant off-beat stand up comedy that will appeal to any audience. Audiences will love our comedy ventriloquist’s crazy acts like puppet mind-reading, blindfolded magic and other clever acts that promise plenty of laughs and audience interaction. His custom made acts can also incorporate a specific product or advertising message, making this puppet magician ever popular with the corporate world.

Scarlett Entertainment offers you a great range of amazing comedy magicians to amaze and entertain.

To book our fantastic Ventriloquism, Magic and Comedy Act or another great act, contact our team.