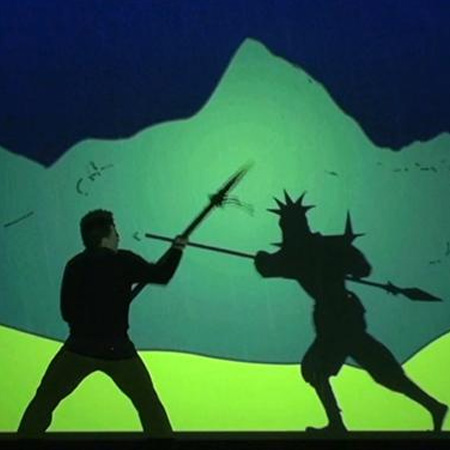 REASONS TO BOOK
Virtual interactive video game show with unbelievable special effects
Trapped in a mystical game-world where they become the player
They must overcome various obstacles & find solutions to tricky situations
Can be customized to the needs of the client and his/her brand
Based in Austria & available to perform at events worldwide
Multi Media Shows, Brand Reveal Entertainment, Unique Brand Reveal Acts, Latest Technology Acts

The performer sets foot on stage and presses the Play-button on the screen. From then on, he is trapped in a mystical game-world where he becomes the player and must interact with the environment in order to survive. The only thing he knows: he must find the treasure.

On his journey through 6 unique levels, he must solve various quests and puzzles and use special skills to evade bats, strange turtles, spiders and piranhas. He must overcome various obstacles and find clever solutions to tricky situations. He must win a high speed race and beat the epic boss in a dramatic final battle.

The only thing which helps him to overcome these challenges are POWER-UPS, in the form of leaves from a magical plant. Besides this he must trust in himself and his abilities. He has to be brave, agile, clever and fast. In the end the treasure is near but will he reach it?

Customisation Possible
To be more attractive for the corporate market, they have developed the customization package which includes product placement in different ways and an alternative HAPPY END.

Shows can be booked in several durations and can be delivered completely hardware equipped.

Level 1:
The Player finds himself in a mystical world and starts exploring it. He comes to the first barrier – somehow he must turn a gear to move the elevator down, but he doesn’t have enough power to do so. After a while he recognizes a flying seed from the plant in the top right corner. He waters the seeds and a magical plant begins to grow. After eating a leaf from this plant, he gains extra powers which enable him to move the gear. The adventure continues...

Level 2:
The Player is now in a mysterious and dark underworld. Bats, strange turtles, spiders and piranhas threaten the player’s game-life. Balance, agility and timing are the keys to completing this level...

Level 3:
The Player’s next quest is solving a huge, touch-sensitive puzzle. By moving single square-parts of the image, he completes the image of the motorcycle step by step. Once completed, the player receives a helmet and the motorcycle into a real object – the player’s racing-machine for the next level...

Level 5:
Bad energy particles want to hold the player back by forming a kind of impassable vertical grid. Impassable? Not with a power-up! Using one of the leaves that the player acquired in LEVEL ONE, he can deform the grid and overcome this obstacle.

Level 6:
There is no grand computer game without an epic boss! At first the player laughs at the tiny size of his opponent -  that is until he grows into a large, menacing warrior! All of the players’ skills are demanded in this dramatic final battle to the death!

Final Scene:
After defeating the epic foe, the way is free for the player to grab the long sought after treasure. The reward never was so close...