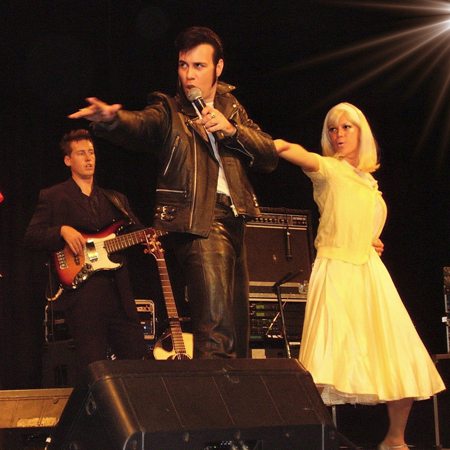 REASONS TO BOOK
Renowned for his imitations of some of the world’s most memorable artistes
Impressions include Elvis, Buddy Holly, John Travolta, Cliff Richard...
TV appearances including The Big Breakfast & the Vanessa show
Performed at venues such as the N.E.C. and Elstree Studios
Based in Dorset & available to perform at events throughout the UK
Tribute, Lookalikes and Impersonators, Elvis Presley, Other Tributes

Darren started his singing career at the tender age of 17 and it was whilst working as a blue coat for Warner Holidays that Darren really discovered his unique talent.  His uncanny ability enabled him to imitate some of the world’s most memorable artistes and following a successful season with Warners, he decided to pursue his dream of becoming an established professional vocal entertainer.

Darren's extraordinary talent has seen him labelled within the industry as "The Voice" and once you have heard him you will understand why!

Darren has made many tv appearances including The Big Breakfast on which he appeared as both Elvis and Buddy Holly. He has also appeared on the Vanessa show and in the Cult Fiction adverts which were aired not just on national & international tv but also on cinema trailer averts just before the feature film.

He has also appeared in the Italian program Film Icons and in various pop videos. Darren has also performed his impressions on BBC radio and performed at venues such as the N.E.C.,The Winter Gardens in Eastbourne, Elstree Studios & many of the national theatres across the UK.

" Great entertainer, England should be proud of you. Really impressed , keep up the good work. "

" Great vocals my friend! Hopefully we get to do something in the future together an Elvis, Roy & Buddy Holly Show! Very talented vocalist! "

" An amazing voice! A real quality tribute to the King of the 50's and 60's. An Artist who would do the King himself proud. keeping his spirit alive. A rare treat for all English and European fans. Darren is one of the best there is!!! God bless you "

" Great tribute to the King! Karate stances give you the edge on the others.......especially in the black leather.....! Love'n'hugs from Sue "

" We just love the way you give a Tribute to the King!! Keep on going, buddy, you are doing a great job!! "

" This is the president of Golden Voice, Norway. A great performer! Best regards and good luck! "

" I just wanted to thank you for the excellent perfomance on Saturday evening. I thought your Legends tribute show was superb, well balanced and well presented. The very fact that you filled the dance floor says it all. Just goes to show that you don't have to do all Elvis to Elvis fans. Thanks again - you did us (and yourself) proud. "

" Allow me to start off by saying it does my heart a world of good to see a fellow ETA bringing only good things to the memory of Elvis. That is our first duty, to keep the memory of the greatest entertainer of the 20th century pristine and clean though our professionalism and our desire to do the best we can as vocalists, entertainers and representatives of the highest caliber! I applaude your work and encourage great things from you and your support group. God bless! "