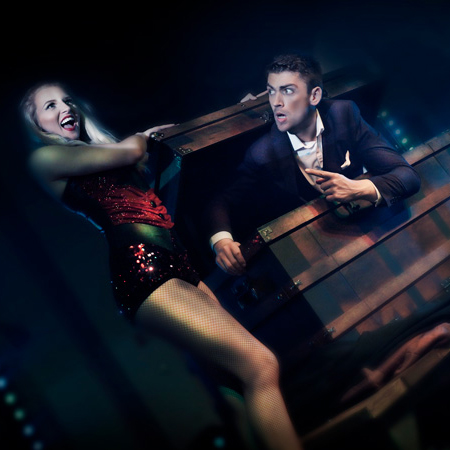 REASONS TO BOOK
Discovering his passion for magic at only nine years old, this performer’s illusion shows also take inspiration from his other passion: music
Performing wow factor magic stage shows, prepare to be left gobsmacked as our illusionist defies your understanding of the laws of nature
The perfect after dinner entertainment for galas, corporate functions, cruise ships and more
Having performed on Keep It In The Family alongside his sister, amongst other TV shows, our magician is internationally renowned
Hire World Class Illusionist Alex for events in Cornwall and worldwide
Magic and Illusion Show, Magic and Illusion, Cabaret and Stage Shows, Magic Stage Show, Illusionist

At Scarlett Entertainment we are always on the hunt for the most exciting after dinner entertainment in the world. From cabaret acts to illusion shows, we source and supply the top performers in the industry to make your event truly memorable. One of our superbly talented magicians, World Class Illusionist Alex performs tricks that you will not believe possible until you see them in real life. From conjuring people from thin air to slicing his body in half with a rope (without a drop of blood being spilled), this magic stage show provides entertainment that all the family will love. Prepare to have your mind blown!

After creating his first ever illusion show with his sister at aged nine, it became clear that our magician had a real talent. Not only able to master complex magic tricks from a young age, our performer was also quickly recognised as a natural drummer and began a career touring the world with different productions.

After touring with shows like Dick Whittington and the Wizard of Oz, our entertainer decided it was time to go it alone and take his vocation for magic to a professional level. Combining his passion for music with his love of illusion, our magicians highly choreographed magic stage shows are a true treat for the eyes.

Often performing alongside his long-term sidekick, his sister, our magic artist’s flamboyant shows incorporate amazing tricks like holding a cup without hands, brings a drawing to life and even making somebody’s head detach from their body. Incorporating lots of fun props and audience interaction into his fantastic routines, our illusionist’s shows are not only totally astounding, they are also visually captivating.

Having entertained on high profile shows like Keep It In The Family, as well as at numerous corporate functions, galas and awards evenings, our magic performer will bring smiles to guests faces and evoke gasps of delight with his skill.

To learn more about booking World Class Illusionist Alex as your after dinner entertainment, get in touch with our team at Scarlett Entertainment today and we will be only too happy to help.