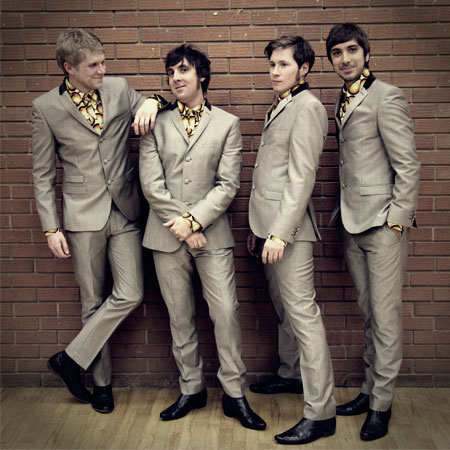 REASONS TO BOOK
The ultimate 1960s tribute show with costumes & authentic instruments
Take audiences on a nostalgic trip back to the swinging sixties
Can tailor their performance to suit specific requirements
Repertoire inc. The Beatles, The Kinks, The Rolling Stones, & The Who
Based in Warwickshire UK & available to perform at events worldwide
1960s and 1970s, Other Tributes, Tribute, Lookalikes and Impersonators, Themed Entertainment

Take your guests on a nostalgic trip back to the swinging sixties with this 1960’s tribute band. Dedicated to recreating the sights and sounds of this archetypal era, this quartet has created a multimedia show that will blow audiences away. Complete with authentic costumes, instruments and performed in front of a screen displaying all the most iconic images from the era, their show provides a snapshot of what a live musical performance in the sixties would have been like.

Their extensive repertoire features all of the very best songs from this iconic musical decade and includes covers of: The Beatles, The Kinks, The Rolling Stones, The Who, Spencer Davis Group, Simon and Garfunkel, The Everly Brothers, The Beach Boys, The Supremes, The Searchers, Sam and Dave, Frankie Valli and the Four Seasons, Dave Clarke Five, The Hollies, Roy Orbison and many many more!

" Last year we booked the [band] for a 60th Birthday Bash. The party had a 60's theme and the music played was solely from that decade. Such is their repertoire that they had no difficulty doing three sets, and some as the last set was extended. We can fully recommend them for any kind of celebration. Fine musicians and perhaps even more important the nicest lads you could meet. "

" These guys are brilliant and everyone at our wedding thought they were great!!! Highly recommend them. "

" Just a quick message to say thank you so much for playing our wedding last night, you were amazing. I can't tell you the number of people who said to me how impressed they were and asked where the hell had I found such a great band from. Anyone who reads this and is thinking about booking you I would like to say it would be a decision you would not regret. On a personal level I'd also like to say what bloody nice blokes you are too. Many thanks lads. "

" WOW! Absolutely amazing band! We had [the band] for our wedding in August 2013 and they were amazing musicians, professional, kind, and couldn't do enough for us. They played to the crowd and had everyone dancing from start to finish. Everyone commented on how good they were and it speaks volumes that everyone at the end was shouting for 'ONE MORE SONG!' I wouldn't hesitate to book them again for a party or event. Thank you lads! "

" Just wanted to say a MASSIVE thank you for playing at our wedding at 24 May... everyone got on to the dance floor straight away and danced all night! All of our guests commented how fantastic you were and what a great atmosphere it was. Thanks also for being so accommodating and letting my sister and my brother-in-law sing a song with you!! Thanks again guys!! "