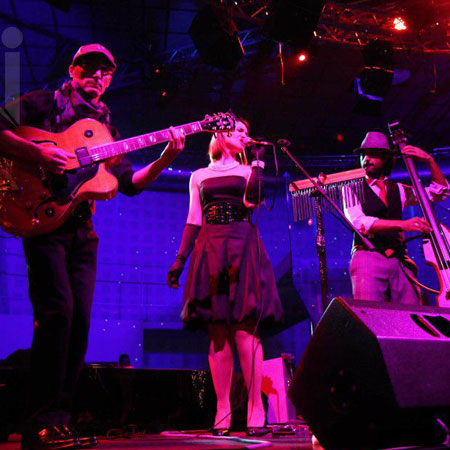 REASONS TO BOOK
The group began from a passion linking two old friends & music colleagues
They have fun re-arranging songs from many different musical cultures
Their latest YouTube video has received more than 24,000 views!
Previous corporate clients include Audi, BMW and Lamborghini
Based in Naples, Itlay and available to perform at events worldwide
Jazz,Swing,Blues and Jive, Acoustic Covers, Live Music and DJ

The Acoustic Trio project started in 2010, as often happens, from a passion linking two old friends and music colleagues who, then started looking for a singer. Being acoustic sound lovers, Carmine, who plays the guitar and Marco, who plays double bass wanted a third voice, who they found in Valentina, a beautiful soulful vocalist.

Having been together now for four years, they have fun re-arranging songs from many different musical cultures, performing a tour among international acoustic/pop/jazzy flavoured sounds.

The Acoustic Trio’s repertoire counts more than 100 songs ranging from jazz to pop and Bossanova, through Neapolitan classics. New songs are continuously added to the repertoire.

The trio perform in the most popular clubs in Italy, re-arranging the songs of many different musical cultures, making a tour of the world music flavoured pop sound.