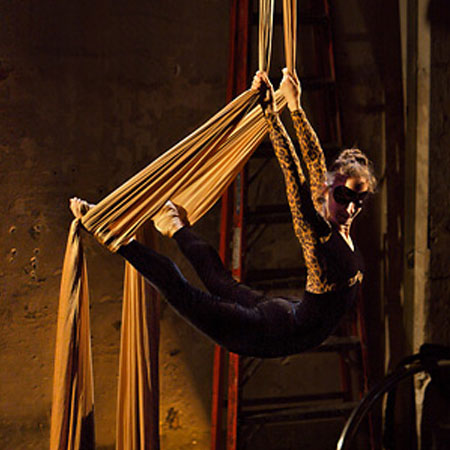 Aerialist and Acrobat Michelle is available as an aerial circus art performer, or as a choreographer of aerial circus acts. New acts can be created in a theatrical style, or a traditional circus style. Or, you can select and/or modify an existing act.

Michelle has been a New York City artist, dancer and performer for the past 20 years. She has always enjoyed participating in the uncommon side of the performance and entertainment world, allowing her to explore a wide range of movement and performance techniques. During her career, Michelle has trained in and performed Aerial Acrobatics, Corporeal Mime, Butoh, Contact Improvisational Dance, and Yoga.

She has performed in such unique and diverse locations as the airport in El Salvador, Central America, the Brooklyn Bridge Anchorage (Brooklyn, NY), the Joyce Theatre (New York), and the Dallas Cowboys stadium in Dallas, TX.