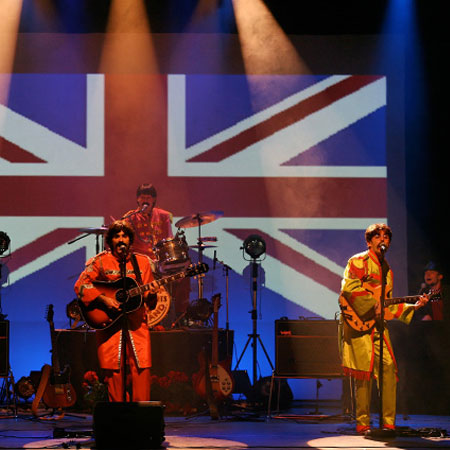 REASONS TO BOOK
Beatles tribute band based in France and performing Internationally
Featuring five musicians who have performed together for over 13 years
Their repertoire includes over 100 Beatles tracks!
Popular at corporate functions in Monte Carlo & the French Riviera
Based in Nice, France and available to perform Worldwide
Tribute, Lookalikes and Impersonators, Themed Entertainment, Beatles, 1960s and 1970s

This Beatles’ tribute consists of five professional musicians who have a passion for the ‘Fab Four’s’ music.  Following several appearances on television, this group has experienced a huge rise in demand for their music, both in France and internationally.

‘The Fab Five’ has performed together for over 13 years and their repertoire includes over 100 Beatles tracks.  Former clients include; The Monte-Carlo Sporting Club, Le Palais Acropolis in Nice, Le King Club in St Moritz, The Marriot in Cairo & Moods in Monaco.

For a nostalgic evening of Beatles’ music that is sure to appeal to a wide range of guests of all ages, ‘The Fab Five’ is now available for bookings through Scarlett Entertainment.