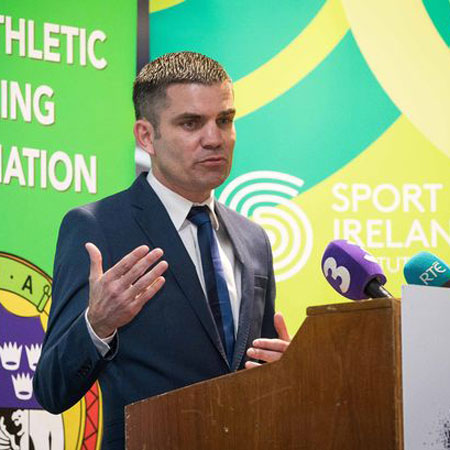 REASONS TO BOOK
Former World Champion boxer gives regular empowering talks and available as a motivational speaker
A regular panellist on RTÉ Sport and multiple appearances on various TV programmes
The High-Performance Director for Irish Boxing with the Irish Athletic Boxing Association
Has a Masters Degree in Sports, Exercise and Performance Psychology from the University of Limerick
Dedicates a lot of time to charities such as Pieta House, Make A Wish, CASA and many others
Speakers and Hosts, Leadership and Motivation Speakers

Bernard is a retired Professional Boxer. He is a former WBA Super Bantamweight World Champion and also a former European Super Bantamweight Champion.  From Neilstown in Dublin, his love of boxing stemmed from his family and he started taking part in the sport at the age of five. Bernard never lost to an Irish fighter in his amateur career but this wasn’t enough for him and he decided to go professional which meant moving to California. While his career was going from strength to strength across the Atlantic, he missed home and missed his family.  He wanted to win a World Title in his home country and his journey, courage and dignity made him an Irish national treasure.

Since announcing his retirement in 2010, Bernard has completed a Master's Degree in Sports, Exercise and Performance Psychology in the University of Limerick.  He has been a regular face on our TV screens as a popular panellist on RTÉ Sport covering everything from Boxing, Soccer and GAA to Current Affairs and the Olympics. He also worked with RTÉ on their show Ultimate Street Challenge, a six part television series that saw ten 16-year-olds from all over Ireland, who had to battle it out in a number of physical challenges on the streets of Dublin to become the Ultimate Street Challenge Champion. In 2016, Bernard presented IFTA Winning Bernard Dunne's Mythical Heroes on RTÉ. Bernard took on the role of the storyteller by delivering the stories of Fionn Mac Cumhaill, Tir na nOg, the Children of Lir, the Tuatha de Danann, Balor, the Formorians, Chu Culainn that have been passed on from generation to generation. Season two returned to our screens in December 2018 where Bernard brought us some of the great Irish Mythical Heroes that inspired him as a youth.

Bernard is currently the High Performance Director for Irish Boxing with the Irish Athletic Boxing Association. Bernard works alongside the high performance coaching team led by Zaur Anita with a view to obtaining the goal of ensuring that Ireland is within the top three countries in terms of the number of boxers who will compete at the Tokyo 2020 Olympic games as well as the ultimate goal of becoming the best boxing nation in the world. He also completed a Masters Degree in Sports, Exercise and Performance Psychology from the University of Limerick. Bernard has become an advocate for the Irish language and set up Bród Club in 2012 which was an ambitious nationwide campaign which aimed to inspire 100,000 people to re-engage with the Irish language. Bernard Dunne’s Bród Club series on RTÉ was a motivational, inspirational series that seeks to talk to the “Gael” in each of us. It sought to rekindle a sense of pride in the language and to turn that pride into something tangible whereby we would be inspired to use the Irish we have, however much or however little that is. Bernard was an Ambassador for Seachtain na Gaeilge in 2010.

Bernard wrote his autobiography, Bernard Dunne My Story,  in 2010 which was published by Penguin Ireland.

Bernard joined the Dublin Senior Football Team as the Sports Performance and Lifestyle coach in 2013 and as part of his role, Bernard worked with each of the squad members, on an individual and a group basis, on a mixture of sports psychology and life coaching which looked at the player’s attitudes, beliefs and values in their sport. His performance coaching helped the players to get into the correct state of mind to produce their optimum results in training and on match days. Under Bernard's guidance, the Dublin Senior Football Team won the All Ireland Senior Football Championships in 2013 and 2015.

Bernard also travels the country talking to young people (10-13 years) about life, believing in themselves and not being afraid to fail or take on a challenge. He believes that young people need to be encouraged to be the best that they can be and that they shouldn’t be afraid to be different. A key part of his message is that being different is what makes them who they are. Young people, especially from certain parts of society, are often labelled as being no good just because they were born in a certain area or are from a certain background. Bernard tells these young individuals that if they want something and are willing to work hard enough at it and make the choices that are needed to succeed, that they can be whatever it is that they want to be. As a young man who grew up in Neilstown, he had a dream of been a World Champion and he got there with hard work, dedication and making the right choices. Bernard gives a huge amount of his free time and is involved with many charities including Pieta House, Make A Wish, CASA to name but a few.