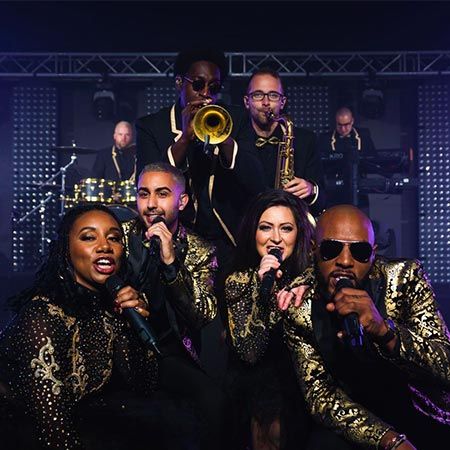 REASONS TO BOOK
Completely scalable but always with an impressive sound, this incredible up-to 21-piece showband will blow your audience away!
Performing from a large repertoire of carefully arranged, covers and medleys of the world’s biggest tunes they will have everyone on the dance floor
Able to include an impressive light show that will dazzle guests and with a high-quality sound system this party band is the entire package
With amazing credentials ranging from Glastonbury, the 2012 Olympics and the BRIT Awards under their belts these musicians know how to put on a show
This incredible London based party band is available for bookings throughout the UK and worldwide
Live Music and DJ, Cover Bands

Book our amazing party band for the ultimate in wow-factor covers bands. This amazing corporate entertainment is perfect for any kind of event and will ensure that your guests dance the night away!

This 21-piece band make a big impact and can adapt to the needs of any party. Playing tunes in amazing medley formats and fresh-off-the-charts covers, there’s little this band can’t do. Fifteen-minute medleys of the top modern tunes are played in two, hour-long sets. A third set of covers from the 1960s to today can be added for that touch of classics.

Specialising in up-to-the-minute pop, the band can also consider requests within their extra set and play traditional Israeli music for Bar Mitzvahs and your favourite tunes for your wedding. This fifteen minute klezmer medley is played by seven of the band members. Other than the main stage act, musicians from the band can also offer acoustic sets as duos or trios playing your guests into your wedding or warming up your conference delegates.

The band’s basic package is a glamorous set-up that your guests will love. The onstage visuals are staggeringly impressive, with a lighting show dazzling the stage, a full percussion rack featuring congas, bongos and a host of extras, a raised drum kit and choreographed dance routines. Added extras can bring whole new levels of impact to this band, with the option to double the size of the lighting rig, double the size of the PA for more than 500 guests and add a professional DJ to keep the party going.

The band consists of two male and two female vocalists, four brass players, a bassist, a guitarist, a keyboard player, a drummer and a percussionist. This broad instrumentation allows the band to play a huge number of covers from a range of artists, including Justin Timberlake, Avicci, Jessie J, Bruno Mars, Drake, Kanye West, Taylor Swift, David Guetta and many more.

The four vocalists can sing and rap in many styles and they even compete, playing a ‘boys versus girls’ set and creating spellbinding harmonies. Available in different lineups including:

The musicians boast some impressive credentials, with degrees from some of the UK’s top conservatoires and performance credits with Emile Sande, Brian May, Rudimental, Robert Plant, Tinie Tempah and more. They have played at all major UK festivals and at events such as the 2012 London Olympics, the Mercury Awards and in venues such as Wembley Arena and the Royal Albert Hall.

Whatever the event that you’re planning, you’re guaranteed to be in the best of hands with this high-energy, hard-grooving, super-talented band. Your guests will be treated to the show of a lifetime, bringing the feeling of a large festival to your party of any size.