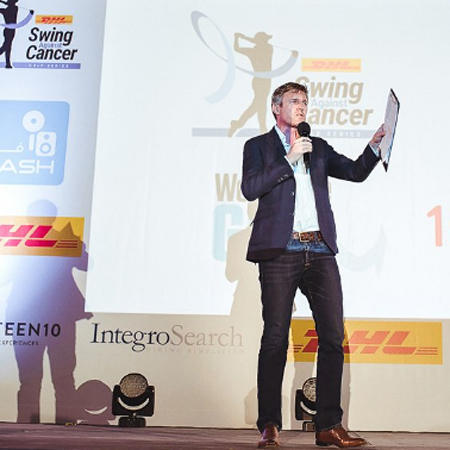 REASONS TO BOOK
Prolific TV and radio presenter throughout Dubai as well as sought after host for international events
Named in Arabian Business as one of the 50 Most Influential Brits in UAE
Live TV broadcasts and interviews from the DIFF red carpet for 8 years and host of Dubai Cares/Oxfam Gala Dinner multiple times
TV anchor and host of Dubai's New Year celebrations and fireworks including the 2014 world record attempt
Host of HRH Prince Harry's Sentebale balls in Dubai, London and South Africa
Presenters,Comperes and Event Hosts, Speakers and Hosts

This is a TV presenter, radio broadcaster and event host with over 15 years experience in the Middle East. Born in the UK he studied and worked in London as a journalist for The Daily Telegraph before moving to Dubai in 2001. He started out as a lifestyle journalist (What's On Magazine, Hello Middle East, Oryx, FourFourTwo) and a radio broadcaster for Dubai Eye 103.8 (The Good Life, Sports Talk, Sports Tonight).

He’s currently the host of Dubai Eye 103.8FM’s daily morning phone-in, The Agenda. He is also one of the anchors on Dubai One’s English language Emirates News bulletin and hosts an online food show on Dubai On Demand.

Our British Event & Award Host UAE has hosted hundreds of events to date for a host of clients. This includes gala dinners, award ceremonies, fundraisers, product launches, festivals, conferences, seminars and even the odd wedding!

The Dubai event host has also raised in excess of $1.5 million at auctions for a variety of charities and foundations despite being a pretty average auctioneer by his own admission.

Contact our team of Entertainment Experts who will be more than happy to help with your enquiry.