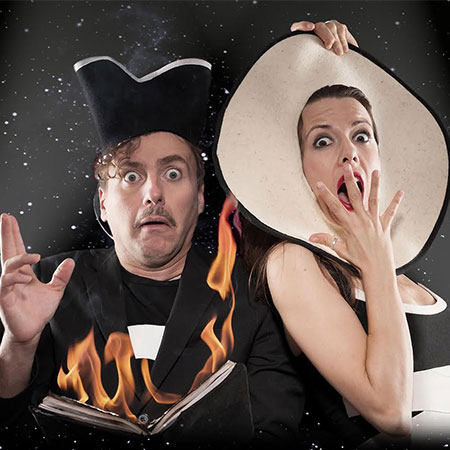 Book our hilarious Cinema Magic Comedy Show for a madcap magical experience like no other. This Original Show is an all encompassing magical extravaganza that combines stunning magic and illusions with cult movies world to create a unique and hugely entertaining show, a Cine Magic Show. Guests will be spellbound by our musical show and the crazy antics of our two artists as they perform their absurd and dazzling magic tricks with wit and style.

This diverse and original stage show is quite unlike anything else your audiences will have ever seen and is sure to spark the imaginations of all who experience it. Book our ingenious performers and experience an award winning offbeat magic show that audiences around the world have seen and loved.

They’ve modernized the art of Chapeaugrafie borned in Paris in 1600 by Tabarin. Shaping an hat with a hole in the center (Tabarin Hat) they have the ability to create an infinity of hats for as many characters, making to relive the legendary scenes of the cult movies that have marked the history of cinema. An exhilarating musical choreography a game between actors and audience, a real explosive combination of Cine-Magic and Visual-Comedy, a unique hats quick change act in the world.

This award-winning original musical choreography led them to win the prestigious “MANDRAKE D’OR” in Paris 2013, to be finalist at FISM World Magic Championship in 2015 and placed as a third-prize winner Comedy Magic in the European Championship of Magic 2017 at the Winter Gardens Theatre in Blackpool.

This incredible Show is suitable for various situations, from a big stage to a little platform, from corporate events to private dinners or cruise ship, theme park, theatre, cabaret, variety and gala. This fun filled and ingenious stage show is perfect for international audiences as the magic and comedy are purely visual.

Our award winning magicians have performed their crazy magic show for major companies like BMW and Warner Bros and have performed at Disneyland Paris and famously appeared on Italy’s Got Talent and others TV shows like Les Plus Grands Magiciens du Monde, The Illusionist and Masters of Magic.

Scarlett Entertainment offers a huge range of comedy magicians to entertain and amuse guests at any kind of event.

Contact our team to find out more about this Cinema Magic Comedy Show and other acts.