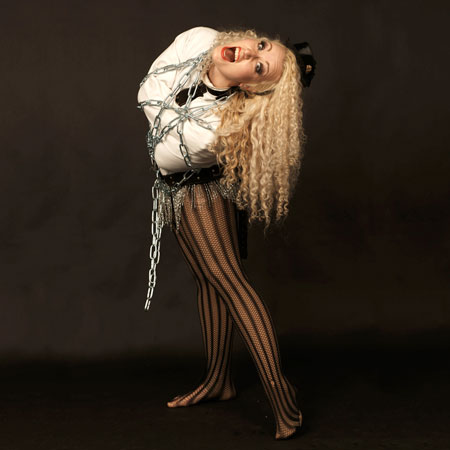 REASONS TO BOOK
An exciting fusion of dynamic dance and dangerous death-defying stunts
Six times Guinness World Record Holder
Acts inc. Bed of Nails, Straight Jacket Escape and Razor Blade Swallowing
Shows can be tailored to suit all types of events from theatre, to club
Based in the UK and available to perform at events worldwide
Unique Acts, Speciality and Novelty Acts, Stunt Act, Circus Entertainment, Bizarre and Unique Circus

This daredevil diva has created an incredible shows that fuses together dynamic dance and dangerous death-defying stunts. Armed with an arsenal of nails, swords and other lethal weaponry she astonishes, shocks and delights her audiences with her alluringly macabre show – all wrapped up with a twist of comedy for good measure.

Her show includes the following acts which can be all be tailored to suit all types of events, from theatre shows, to club nights, and even children’s parties!

She can also perform the Human Chopping Board, Whip Crocking, Kiss of Death, Sword Swallowing and Concrete Block Smash alongside another sideshow performer as a double act. A professionally trained dancer, in a variety of styles, with over 20 years of experience she can also include dance, aerial hoop and contortion into her performances.

A testament to fascinatingly captivating performance she has entertained the masses at well-known events around the world including the Adelaide Fringe Festival in Australia, Tassy Circus Festival in Tasmania, Download Festival and Sonisphere. She has also performed at private villa parties in Ibiza, Buckingham Palace and the Theatre Royal Drury Lane.