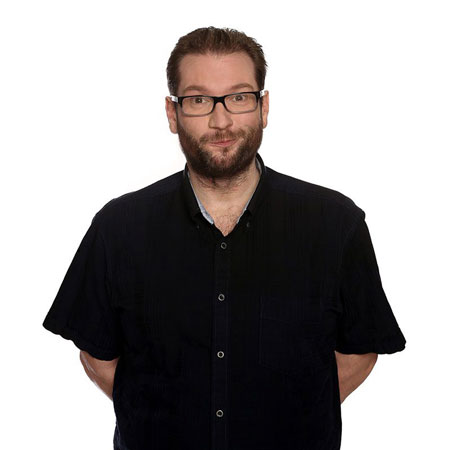 REASONS TO BOOK
Hilarious and double Sony Award winning one-liner comic
Available as a stand up comedian, award host, MC and compere
Seen on Mock The Week, Dave’s One Night Stand and Russell Kane’s Whistle-Stop Tour
One of the most followed and quoted comedians in the country
Based in the UK and available for event all over the world
After Dinner and Comedy Hosts, Comedy Act, Speakers and Hosts, Presenters,Comperes and Event Hosts, Speciality and Novelty Acts

Stand up comedian Gary Delaney is widely regarded as being the most quotable one-liner comic in the country. His dry wit and self-deprecation. He projects the barely hidden delight of a cheeky schoolboy and the audience can’t help but be carried along by his infectious charm. He is the premier gag smith of his generation and through Twitter he’s become one of the most followed and quoted comedians in the country.

The celebrity comedian has also written extensively for TV and Radio including, 8 Out Of 10 Cats, League Of Their Own, 10 O’Clock Live, The British Comedy Awards and The News Quiz. His debut show Purist was a big hit at the Edinburgh Festival in 2010, selling out every night and receiving many four and five star reviews. Gary’s the only comic ever to have got two gags in the same Top 10 for Dave’s TV Funniest Jokes from the Edinburgh Fringe.

Stand up comedian Gary Delaney is available as a:

Contact us at Scarlett Entertainment if you would like to book Gary Delaney as you stand up comedian, award host, MC or compare.

" Gary was absolutely fantastic! Everyone but everyone loved his performance. Not only that, what a lovely man. "

" Gary hosted our Awards Dinner with his own unique blend of humour and wit which our guests very much enjoyed. "