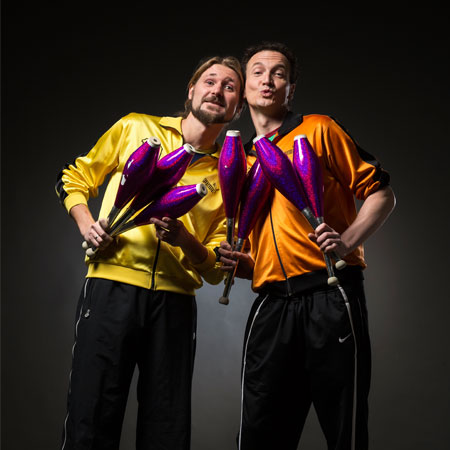 This hilarious comedy juggling duo will liven up your event with their diverse range of performances and shining wit and charm!

Always learning new and exciting routines and tricks, this comedy duo are the superstars of juggling. They like to be anything but ordinary, juggling with knives, household items, tools, mannequins, LED clubs, fire sticks and more, whilst giving a dramatic theatrical performance that will have audiences in stitches and crying with laughter. Not only do the juggle with unusual objects, but they take their skills to the extreme, juggling atop ordinary and 3 metre high unicycles and while balancing atop multi story Rola Bolas!

With their innovation and skill this duo have taken comedy, juggling and acrobatics in a whole new direction. Their authentic and detailed costumes and props, precise choreographies and side-splitting comic sketches combine to create an extravaganza of themed performances unlike anything that you have ever seen before. Each of their incredible performances can be tailored to meet your exact needs, whether you’re looking for some swashbuckling pirates or dashing musketeers, an Olympic themed sketch, fire show, LED show or anything on stilts they can deliver!