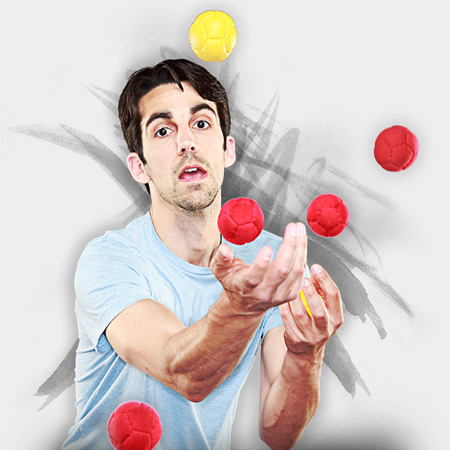 REASONS TO BOOK
Juggler and contortionist with a comedy persona, which is unmatched
Scot is a truly agile, creative and connected entertainer
A top comedian, contortionist and juggler, popular at corporate events
He creates spectacular, theatrical prop-oriented productions
Based in California and available to perform at events worldwide
Walkabout Entertainment, Jugglers and Diablo, Juggling and Diablo Act, Circus Entertainment, Contortionist

Comedy Juggler and Contortionist Scot has performed all over the world on stage, television and film; and has helped other creators of entertainment along the way.

His drive has always been to give audiences what they want before they ask for it. This has motivated some strange progressive stage creations and a comedy persona, which is unmatched.

This talented Comedy Juggler and Contortionist has performed on the Tonight Show with Jay Leno and is a featured performer for Cirque-a-palozza, produced and directed by Stefan Haves (a director of seven Cirque de Soleil productions) who calls Scot "sensational in every sense."

The diversity of venues and audiences is what has made Scot a truly agile, creative and connected entertainer. His first professional shows at age 11 were magic tricks performed at banquets and birthday parties.

Scot jumped from church benefits to a global tour as a street performer to touring with top musical act Brooks and Dunn in 2001 and 2002.

He explored nightclubs and comedy clubs and, Scot is now a top-ranked comedian, contortionist and juggler at colleges and corporate functions.

" More than just an amazing juggler or contortionist, Scot is an improvisational phenom. One can only imagine how hard he worked for it to come off with such ease. Hilarious. "

" Scot’s performances are a delightfully irreverent indulgence with a highly-refined level of showmanship that amazes audiences of all ages. "

" He's courageous on stage, and savvy off. "

" Scot is one of the most hilarious comedy and variety acts that I have experienced in my 20 years of event planning. He kept both the kids and the adults entertained for 20 minutes straight. I simply say USE HIM! He is the best. "