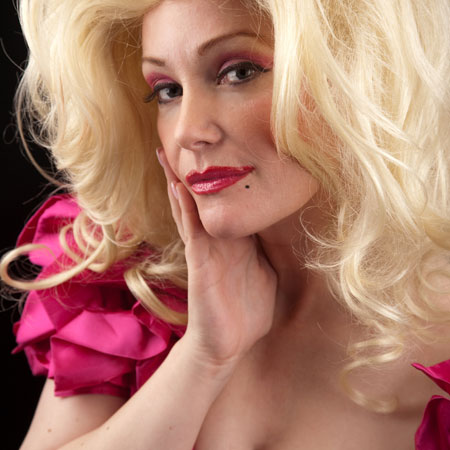 This show pays tribute to one of the greatest icons of popular music: Dolly Parton. The stunning vocals of Andrea are backed by an all live 4 piece band. You can expect to hear accurate versions of Dolly’s most celebrated material, from her early Country classics such as “Coat of Many Colours" and “Applejack”, through to the later smash hits such as “Jolene”, “Islands in the Stream”, “I Will Always Love You” and “9 to 5”.

Andrea has been a professional singer for many years, mainly performing at weddings and functions. In that time, many people have commented on her similarity in sound and style to Dolly Parton. As a life long fan of Dolly’s, Andrea always took this as a huge compliment, but it was only recently that she has decided to use that aspect of her talent to reach a wider audience.  A new band was formed featuring some of the most capable and experienced musicians in the North East.

When our Dolly Parton tribute artist performs solo she usually does two 40 minute sets, with a full costume change during the break. She sings all of Dolly's most well known songs, as well as many country standards and pop classics that Dolly's covered over the years.

She performs completely in character, so the narrative, interactive and humorous elements of her theatre show are maintained when she's on stage solo.

Andrea also plays Dolly in the new Dolly/Kenny theatre show “Islands in the Stream” which features Peter White as Kenny Rogers. Andrea and Peter can perform to playback, and Peter is often booked to make guest appearances with Andrea and her band.

As well as celebrating the life and music of Dolly Parton, Andrea will be incorporating her own experiences and music into the show.  Andrea is able to closely mimic Dolly’s unmistakable sound and phrasing, as well as her renowned onstage wit and charm.

To book our Dolly Parton Show or for more information about booking this tribute act, contact our team of Entertainment Specialists today.

" When I heard Andrea sing "Islands in The Stream" it could have been Dolly herself.... "

" We had an amazing day and she topped it all off for us - she was amazing! "

" Everybody thought she was fantastic! "

" I'd never liked the song "I Will Always Love You" until I heard her version... "

" You have a lovely, lovely voice "

" You have a wonderful voice - your vocal ability is superb "