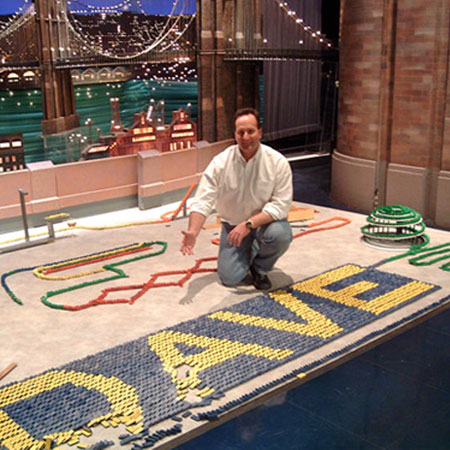 Robert has been listed in the Guinness Book of World Records (he originated the category of Domino Toppling and has held the World Record five times) with elaborate domino creations that include special effects called “The Tarzan Swing,” “Bahama Tom Inverted Cascade Slide for Life,” and “Six Days Till Sunday.”

He is the pioneer of the world domino toppling craze, which has swept the USA, Europe and Japan. He originally appeared on The Tonight Show twice, where Johnny Carson called his work “an art form in motion.” Robert has also performed for the Late Show with David Letterman, Ellen Degeneres, and Mister Rogers, among others.

Live domino toppling shows add fun to any event! Robert will come prepared with dominoes and special effects to delight people of all ages.  Robert has created many domino displays to raise money for charities, as well as publicity events for shopping malls, corporate meetings, colleges and high schools.

He has filmed advertisements for Kellogg’s, General Electric, Domino’s Pizza, IBM among others. His dominoes have appeared in the movies The Toy and Almost Summer. He has set up and toppled well over 1,000,000 dominoes in his career