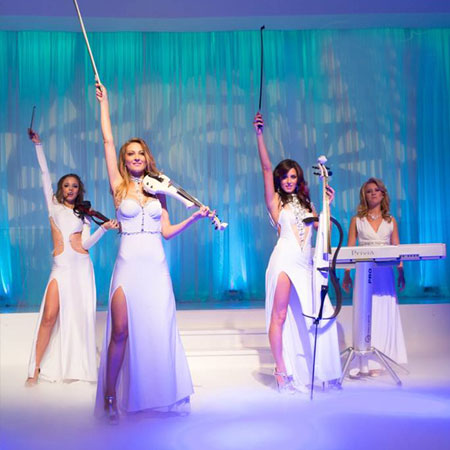 REASONS TO BOOK
Fast becoming one of the most original String Quartets in Europe
Perform contradictory music styles to shock, surprise and delight
Play everything from Classical, Fusion, Pop, Balkan, Bossa Nova and Jazz
Provide customisable programs that are perfectly suited to your event
Based in Romania and available to perform at events worldwide
Live Music and DJ, Electric Strings

Based in Bucharest, our talented String Quartet has travelled all over the world sharing their stunning and often unexpected musical styles with audiences at more than eight thousand concerts.

In high demand, this international string quartet has performed at a diverse range of events including festivals, corporate events, official cocktails or private events throughout Europe, Africa, Asia and the Middle East.

Fast becoming one of the most original bands in Europe, the quartet have taken the successful formula of a traditional quartet and established two highly flexible formulas. These include a contemporary electric string quartet and an electric quartet with a band, providing more of an upbeat party vibe!

Open to any combination, the crossover string quartet is able to provide fully customisable programs that are perfectly suited for your individual event. So whether you are after a sophisticated string quartet to provide ambient background music or a more upbeat party vibe at a private or corporate party - they can provide it all!

Adapting to different types of events and audiences, they put a lot of virtuosity and energy into each show; from classical music with a modern touch, to fully electrified atmosphere party shows, where guests enjoy dancing all night long and evergreens for people to dance too!

To book our outstanding electric string quartet or for more information, contact our Entertainment Specialists today.

" “Their music is full of energy, their stage appearance and performance are captivating, and their playing is insane!” "

" “In an elegant finale, electric string quartet left the Lebanese yearning for more violin and cello tones. We are very eager and cannot wait for this creative quartet to come back to Beirut again, to play music that delights the city and raises the level of culture.” "