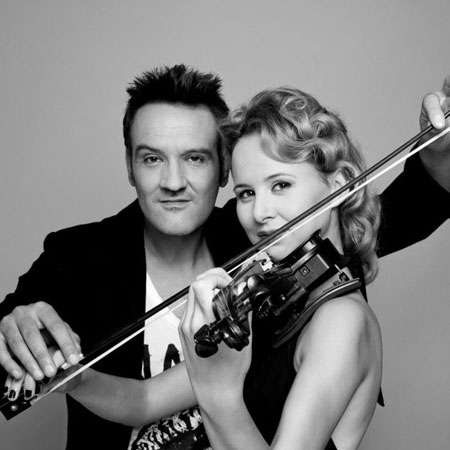 REASONS TO BOOK
In-demand partnership between a top international DJ & a leading violinist
Entertains any audience no matter the occasion or style of music required
Popular with festivals, nightclubs, 5 star hotel venues, corporate events
Previous clients include Varilux, Milka, Ron Barcelo and Heineken
Based in Ibiza & available to perform at events throughout Europe
Live Music and DJ, DJ with Musicians, Electric Strings

This glamorous partnership between a top international DJ and a world-leading virtuoso violinist is in huge demand with festivals, night clubs, 5 star hotel venues and corporate events throughout Europe. Together they are very experienced at working to entertain any audience no matter what the occasion, theme or style of music required.

After working for two years in the recording studio developing different sounds for both National and International record labels, the DJ & Electric Violin Duo decided to create this new musical concept in 2012.  They have worked for established brands such as Varilux, Milka, Ron Barcelo and Heineken.

A blend of elegant global music, they have secured their positions as residents at Cafe del Mar.  By combing live violin and DJ together they have added an extra dimension in entertaining the crowd. They also have a great ability to pre-plan the evening, but like to read the crowd and keep the atmosphere and party going.

Belinda
The hallmark of this violinist is her ability to address multiple musical styles.  In a just a few minutes on stage, she is able to fuse the melancholy sound of a violin with any musical style, and certainly in recent years has shown that the binding of classical and electronic music are a perfect mix.  Belinda has performed at prestigious venues worldwide including Cavalli Club Dubai, Armani Milan Club, Pacha Ibiza, Fabrik in Madrid, Privilege and Space Ibiza.

DJ Angel
Angel is one of the most representative deejays in the national electronic scene, thousands of souls dancing to his music and albums sold along with several music awards have confirmed the undeniable quality of this extraordinary DJ.  He has been the resident of the most important clubs in Madrid but also played all around the country as well as internationally.