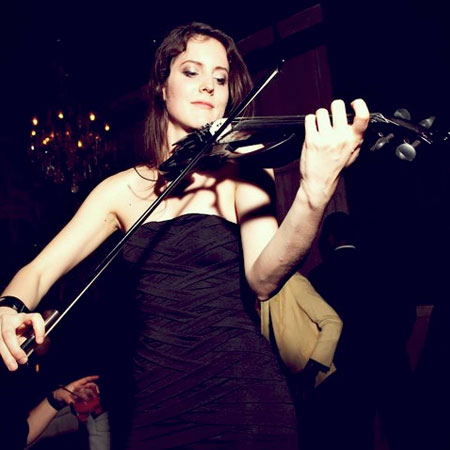 REASONS TO BOOK
A fearless electric violinist who showcases her virtuosity over ANY song
Her improvised performances are riveting, spontaneous and high energy
Wowed international audiences at high end corporate and private events
Can be completely customized to any event or combined with DJ's or bands
Temporarily based in New York, USA and available to perform at events worldwide
Electric Strings, String Quartets,String Trios and Solo Strings, Live Music and DJ

Emily is a dynamic violinist, improviser, composer and producer whose fearless style and commanding technical abilities have wowed audiences internationally.

After seventeen years of rigorous classical training, Emily finally decided to indulge her lifelong love of dance music and stilettos by moving to New York and hitting the club scene with her electric violin. Known for her impassioned style and virtuosic, improvisational performances, she has quickly made a name for herself, sought out for some of the hottest music, fashion, and nightlife events in NYC. Collaborating with top DJ's, including Mitch LJ and DJ Kiss, she performs regularly at Ciprianis, Avenue, the Griffin, LAVO, and Mister H, as well as high-end private events for celebrity clients such as Iman and Thomas Keller.

Her desire to explore the violin's full range of possibilities within pop music led to her infatuation with and subsequent mastery of Ableton Live. Using Ableton to incorporate customized effects, looping, and vocals into her performances, she adds her own personal flair to any song while enhancing the inherent qualities of both the original production and the style of the DJ. This quest to push the limits of the violin inspired her, in collaboration with DJ Sarah Fab, to form the duo Valenka Kiss, a hybrid of live production, heavy house music, and tricked out electric violin sounds.

In addition to her blossoming career as an electric violinist, Emily's classical background has opened many doors for her. In 2009, She toured Germany for six months as the featured violin soloist in the Franco Dragone show INDIA, performing music by the legendary Bollywood film composer A.R Raman for audiences of 2,000 people nightly. In 2011, she was the solo violinist in the Broadway production of Peter Pan at Madison Square garden. She was also featured as the solo musician in a new adaptation of the Scarlet Letter at the Intiman Theater in Seattle using her specialized high-tech setup and performing a score written for her by renowned composer and fellow electro-violinist Todd Reynolds.

Emily was selected to tour Pakistan with the NGO Cultures in Harmony. She performed western and south Asian classical music for school children, young adults, and dignitaries (including the legendary Bhutto family), collaborating with esteemed traditional and popular Pakistani artists.

To find out more about how to book get in contact with our helpful team of Entertainment Experts.

" I saw Emily perform recently at a party and she played with virtuosity, artistry and elegance. She truly made the entire event spectacular. Everyone fortunate enough to be present at the party was talking about what a wonderful touch it was to have such a fabulous live musician. "

" Emily's raw talent and skillful versatility makes her an outstanding musician. Her personality and grace makes a her a star "