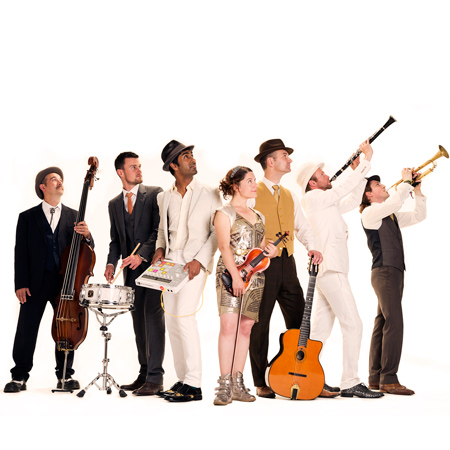 REASONS TO BOOK
A unique fusion of 1930s and Gypsy Swing with electro beats!
High-energy performances will pack dance floors of any size
Britain’s first Live Electro Swing Band
Perform reinvented covers of ‘It Ain’t Right’ & ‘Diga Diga Do’
Based in the UK and available to perform at events worldwide
Live Music and DJ, 1920s and Vintage Music, Jazz,Swing,Blues and Jive

One of the first Electro swing acts in the UK and Britain’s first Live Electro Swing band, this group play a unique fusion of vintage 30s and 40s big band hits and Gypsy swing with live-mixed electro beats! Their unique upbeat sound and high-energy performances are a foot-stomping compilation of soaring licks, hot swing-cat vocals and vintage harmonies.

Their irresistible sound will pack dance floors of any size! Armed with trumpet, violin, guitar, double-bass, drums and live beats the band play unique reinvented covers of some of the greatest Swing hits such as “It Ain’t Right”, “Don’t Fall Asleep”, “Diga Diga Doo” and “Sing Sing Sing”. As well as their own original Electro Swing compositions.

They have been bringing their unique sound to festivals like Glastonbury and private events across the UK since 2009 and have also performed live on BBC Radio 1.

If you really want to impress the guests at your event don’t hesitate in speaking to one of our dedicated team of professionals at Scarlett Entertainment who will be more than happy to assist you in booking this live Electro swing band for your event or party!

" Quite simply one of the very best and longest serving bands on the White Mink stage. This incredible 8-piece band perfectly marries vintage swing with modern beats in a way that few other can match... and importantly, in a way you can Swing-dance to. They have also been the band that have launched more new events and stages for us than any other. These guys always deliver! "

" This 8 piece live Electro Swing band is driven by brass and in love with beats. A unique jumping Django Rheinhardt sound "

" The originators of live Electro Swing in the UK. They are at the cutting edge of the live remix of the 1920`s to the 1950`s. Unlike most acts, the band are all acclaimed and very talented live musicians. They are on a path to greatness "