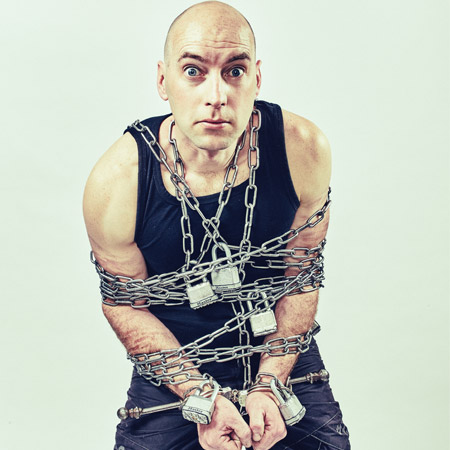 REASONS TO BOOK
One of Europe's top street performers and has entertained around the world
Blend of laughter, danger, excitement with comedy, escapology, acrobatics
It will leave everyone asking "How did he do it?"
Perfect for festivals, corporate events, street entertainment...
Can perform his whole show in English, French, German and Japanese
Stunt Act, Speciality and Novelty Acts, Circus Entertainment, Escapologist

Escape artist Rob is one of Europe's top street performers and has entertained around the world including Japan, Australia and New Zealand appearing on TV, radio, at festivals and as a street performer in places including London's Covent Garden, the home of street performing.

Combining comedy, escapology and acrobatics, there is a perfect blend of laughter, danger and excitement. Improvisation, quick witted wise cracks and crowd participation create a unique atmosphere that leaves audiences both in amazement and hysterics and this highly polished show has made Rob a favourite among all ages and nationalities.

A former junior national pole vault champion, Rob started out as a street performer back in 1999 in a double act with his brother, Liam. Since then he has performed on the street and at festivals in cities around the world and can perform his whole show in English, French, German and Japanese.

Street performing can be the most challenging yet rewarding style of entertainment. Taking an empty space and attracting an audience of over a thousand people, working the crowd and creating a unique atmosphere are Rob's passion and specialities.

Booking Escape artist Rob is a unique and exciting addition to any event. From handstands while balancing on chairs with hilarious comedy throughout to Rob's signature escape, it will leave everyone asking "How did he do it?" Whether you are planning a celebration, employee relations event or a product launch Rob's performance is the perfect ice breaker and morale booster. With endless witty one liners and the excitement of the act, Rob offers value for money and will make your event unforgettable to your guests.

To book this incredible escape artist or for more information, contact our Entertainment Specialists today!

" Rob Roy gave me the thrill of a lifetime! How often do you get to watch a man escape from a straight jacket while suspended upside down from a helicopter over 100 feet in the air? The launch of our inaugural festival in St. Catharines is something we will always remember - thanks to Rob. Throughout the festival up on his ladder, handcuffed and chained, he was a crowd favourite. And on the ground he's one helluva good person to work with. "

" LOVED IT! You put on a brilliant show that's funny, entertaining and above all professional. Big thank you to the two of you for organizing our Family Vaudeville show. The two of you did an absolutely amazing job with it. You really make a terrific team and are an absolute pleasure to work with. Would love to have you back "

" Rob is a delightful addition to any festival. Rob was professional, courteous, and more than accommodating. It is a true pleasure to work with him! The crowd absolutely adores Rob's show, and come back again and again to see him perform, begging for more. I can honestly say that Rob is by far the best crowd builder I have ever witnessed - the crowds over the weekend were never better than when Rob was playing the pitch! We look forward to welcoming Rob back in future! "

" We hired Rob to perform a series of escapology stunts for us, including recreating Houdini’s famous strait jacket escape whilst hanging from a rollercoaster! He also performed at a press, media and celebrity event that was held to mark our season launch and the feedback from our guests was phenomenal. His performances were breathtaking and added a real wow factor – he even managed to get a few of the celebs in the strait jacket! "

" Well done! You are the strongest link! "

" We have had the pleasure to have Rob with for us for the past year. Rob has help boost our revenue by 10% with his witty, clever and truly amazing show and has really made a brilliant contribution to our brand awareness. He is a great crowd pleaser from young children to adults with his laugh out loud humour and his ability to escape from a straight jacket in under a minute and a half. We would really recommend Rob to anyone thinking of hiring him as he is truly committed, professional and a absolute pleasure to work with. "

Max Ferreira, General Manager, Ripley's Believe It or Not! London!