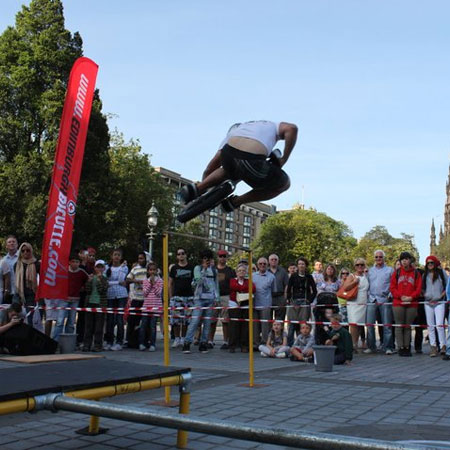 The UK's top Extreme Unicycling Display was formed in 2008 and consists of 7 of the UK's top Street, Trials, Flat land and Mountain Unicyclists including the current Street and Trials Champions and two former champions.  They are perform tailor made shows for a variety of events including product launches, promotional campaigns or television/media.

Extreme Unicycling is like BMX biking but on one wheel. Tricks are performed using obstacles found commonly in an urban environment.  They take the skills perfected in the streets and bring them to events across the country using our custom built display rig which simulates the urban playground.

Typically a 20 minute show would involve the riders taking turns to demonstrate their skills on the display rig. This incorporates a number of competitions allowing the audience to support their favourite rider including high jump, long jump and best trick contests.  The finale involves members of the public being jumped over by one of our riders.  All of the above is narrated by our MC.  Shorter choreographed routines are also available for stage and television shows.

" The guys were incredible and made everything look so easy "