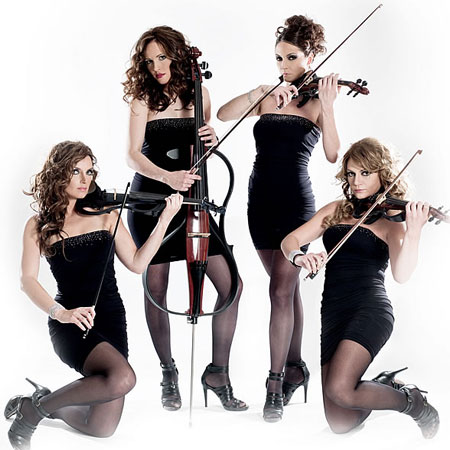 The explosive women's Electric String Quartet is comprised of four talented girls who are accomplished musicians and members of Symphony Orchestras in Thessaloniki.  After completing their studies in prestigious music colleges of Britain and Germany they returned to Greece and decided to form a crossover quartet, in which they combined their classical training with their love for more popular styles (Pop, Rock, Latin, Middle East and even Greece music).

The reception they got in Greece was amazing. The unique way in which they combined classical music with electric sounds as well as their stunning stage performance gained for them a fan- base of different age groups, music backgrounds and nationalities.

In March 2005 they appeared on the opening ceremony of Final Four Champions League Volleyball, which was broadcasted live in fifty-two countries. Their high artistic level, their passion and energy was amazing.

Since then the quartet have appeared in all the Prime-Time TV shows in Greece and in Cyprus (including Greek X-Factor live, Awards for the Man of the year and many others).

They have performed three times in honour of the Greek President and they have appeared in many concerts, VIP events, gala nights, medical conventions and Music Festivals all over Greece, Cyprus, Turkey and in London.

The members of the Electric String Quartet have performed with major rock and pop stars with great success. In 2005 they performed with Vanessa Mae in Thessaloniki, Greece. In 2010 they were selected to collaborate with 'Scorpions' in their concert in Athens and last March were the support group of 'Deep Purple'.

Contact us today and resuquest further details in this act!