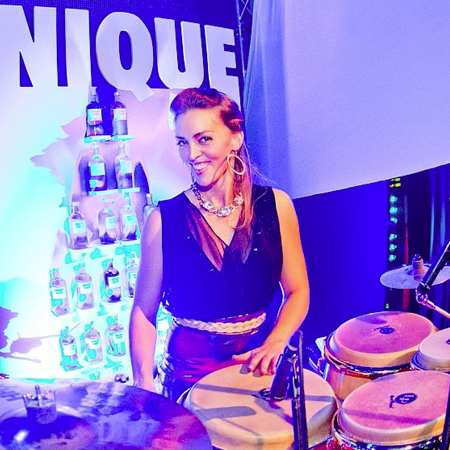 Jaz is a drummer from the prestigious Paul McCartney School of Music (LIPA).  She is well-renowned for her high-energy performances on drum kit & percussion on the live DJ/percussion scene as well as the versatility & glamour that she brings to more subtle musical environments.  She is a multiple-endorsee & plays DW Drums, Tocca congas, bongos, timbales & electric drums and samples made by Roland.

Jaz has performed with DJs & alongside other musicians worldwide for clients such as Valentino, Richard Branson, Armani, The Beckhams, Pierre Cardin & for members of the Royal Family.  She has played directly for and accompanied mainstream artists in the pop world (Marti Pellow -Wet, Wet, Wet, Petula Clarke, Sandi Thom, Maria Lawson, Lionel Richie..).