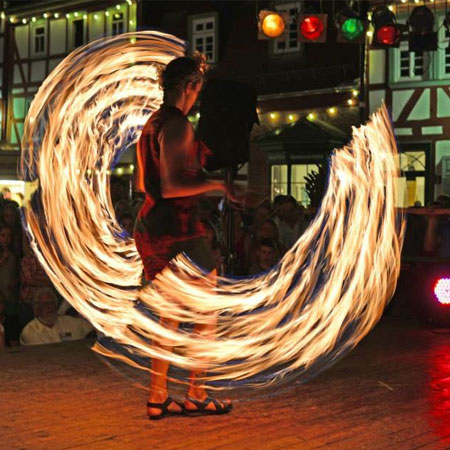 Based in London our talented fire performer, Miriam offers an array of fire shows with poi, fans, hula hoops and burning ropes.

Each of her fire performances combines beautiful manipulation moves, risky jumps and jaw-dropping neck hooping, which is sure to captivate your audience.

Poi and Ropes is one of the oldest fire props, originally used by Maori women in their traditional dance. Miriam's fire shows with poi have an exotic flair and can be adapted to fit various themes. The flames of the spectacular fire ropes are more than half a meter long and create the illusion of huge fire discs when spun.

In addition to this, Miriam also offers a highly unique fire dress act - a mesmerising performance with up to 19 flames. In this self-made dress, Miriam stands in a circle of fire, crowned with flames, ferociously spinning her fire fans in a performance that is sure to leave your audience speechless.

Each performance can be combined into one incredible show, or tailored to perfectly fit your special event.