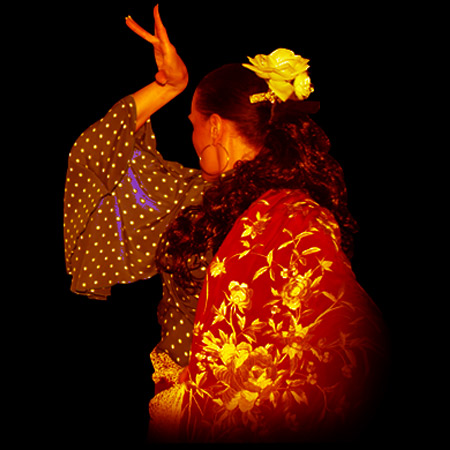 This flamenco show offers a performance of dance, music and traditional flamenco singing.  Based in Rome, the show consists of a guitarist, a singer and a male and female dancer.  Performing dances and music of the classical Spanish tradition (with castanets and sombrero) and the Andalusian flamenco (shawl, fan) with the execution of several pieces of Rumba Gitana involving audience participation.

This flamenco show gives the viewer a particular involvement, an emotional charge that no other dance form is capable of arousing, an explosion of rhythms, colours and emotions that encapsulate all the complexity of the Spanish people.

The group are currently working in the most famous Tablaos in Rome including: El Tremendo, El Duende, La Paella 2, Don Pepe (Ostia), and have participated in various music festivals, theaters and clubs throughout Italy.  They perform regularly at the Palazzo Brancaccio, St. Regis Grand Hotel, Overture Hall, and Teatro Ghione Theatre in Rome.  This flamenco show is perfect entertainment for themed shows at conventions and corporate events, private parties (birthdays & weddings).