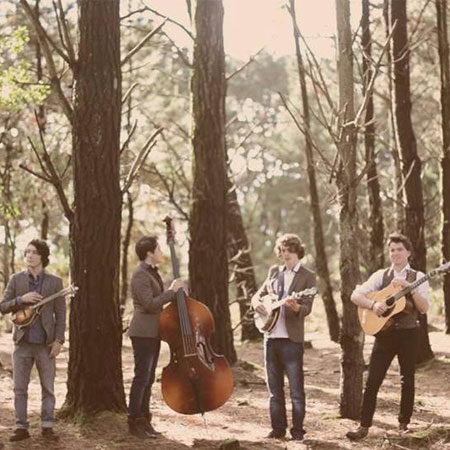 REASONS TO BOOK
One of the hottest bands of their style in the UK
Spine-tingling harmonies & heartfelt melodies to warm the cockles
Opened Ralph Lauren’s first EU store in Covent Garden, London
Played at The Royal Albert Hall & Cornish Bluegrass Festival
Based in Cornwall & available to perform at events worldwide
Live Music and DJ, Irish,Ceilidh,Folk and Country, Ceilidh, Folk and Irish , World and Cultural Acts

Formed from four extremely talented and ambitious young musicians this Bluegrass band have taken the nation by storm! From their humble origins busking in Penzance they have gone from strength to strength; opening Ralph Lauren’s first European store in Covent Garden, London and performing with sea shanty legends Fisherman’s Friends.

Armed with a guitar, mandolin, banjo and double bass they play with a skill and passion that will warm the cockles of even the coldest heart! When grouped around a single microphone their spine-tingling harmonies and heartfelt melodies convey the thrill that these guys get when performing the music they love. They perform a warming mix of original material, folk, bluegrass and country standards as well as the odd cover of a more contemporary hit.

Since 2011 they have performed at over 280 events across the UK, France and Sweden including the Orwell, Didmartin, Gower and Cornish Bluegrass Festival; The Royal Albert Hall for the BBC Youth Proms; for Ralph Lauren and at numerous private functions. They have also realsed two CD's which have already sold over 2,000 copies. Well on their way to consolidating their reputation as one of the hottest bands of their style in the UK, their infectious energy and lively performance will be the highlight of your event!