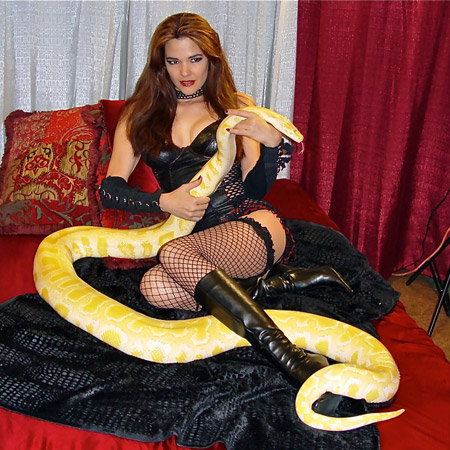 REASONS TO BOOK
This glamorous snake charmer will excite your guests with her dangerous performances
She is also a model, magican, fire eater & owner of exotic animals
Can provide a full stage show or meet & greet guests & pose for photos
Has appeared on The Tonight Show & worked with clients inc. Nokia & IBM
Based in Las Vegas & available to perform at events worldwide
Walkabout Animals, Speciality and Novelty Acts, Animal Acts, Walkabout Entertainment

Our glamorous Vegas snake charmer, magician, model and fire eater is a natural born entertainer. Owner of 25 snakes and 26 other exotic animals, she has devoted her life to caring for and nurturing mistreated animals. Specializing in high impact, sensual snake performances, her dedication to the welfare of her animals enables her to achieve dangerous and thrilling live stunts!

A highly sought after performer, she has appeared on numerous television programmes including the Tonight Show and the David Letterman Show, as well as entertaining high profile corporate clients including Nokia and IBM.

Also able to design custom performances for your special occasion, this spectacular artist can combine any number of her acts to bring a wow factor to your event. Contact our Las Vegas office today for more information about booking this glamorous snake charmer for your next event.

Speak to our Las Vegas based Entertainment Specialists for tips on how to keep the snakes content backstage - a quiet area and a power socket for a heat mat should do the trick!