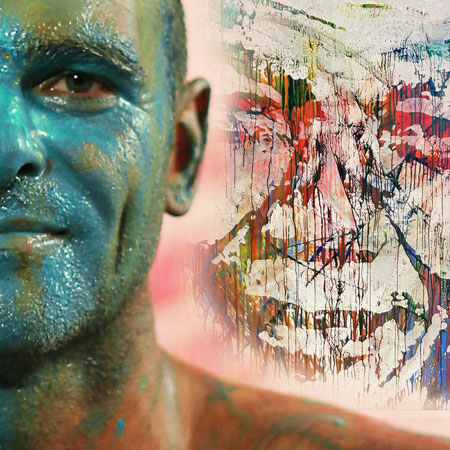 REASONS TO BOOK
World’s 1st glitter painter who has been broadcast live worldwide
Performed on TV in Europe & Asia, worked with Le Cirque du Soleil…
Michaël artworks have been auctioned for more than 100 000 euros
Producer of a new live painting show Splashing Art unique in the world
Michaël is available to perform everywhere in the world
Speed and Glitter Painters, Brand Reveal Entertainment, Art Based Entertainment, Speed,Spray and Glitter Painter

The rare precious appearances of the world famous Speed and Glitter Painter Michael captures the attention as he creates, always live, ordered portraits or concepts. His signature flair for the arts have allowed his pieces to be auctioned last year in charity events from $57000 to $135000 USD and can be found in museums.

Best known for taking speed painting to the next level by pioneering the “Live gluing” technique in his performances which have been showcased on nearly all national TV channels in the world since 2008. He now reserves his appearances to allocated rare occasions and exclusive clients making Michael the prime choice to show the audience a spectacle they’ve never seen before.