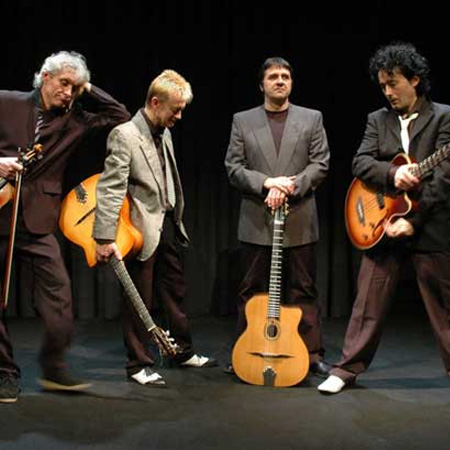 REASONS TO BOOK
Play the jazz manouche style in homage to Django Reinhardt
The 4 piece revitalize the genre with original compositions & covers
Their 2007 album was well received by the public & press alike
Can perform as a duo, trio or full line up depending on clients needs
Based in Eastern France & available to perform at events worldwide
Live Music and DJ, Jazz,Swing,Blues and Jive, Gypsy

Founded in 2001, this talented and highly established Gypsy jazz band based in Eastern France performs the best titles of Django Reinhardt and Stephane Grappelli as well as their own compositions.  The band consists of four musicians, two guitars, violin and acoustic bass.  They are available as a duo, trio or full line up depending on the client’s needs.

Gypsy jazz is the impetuous mixture of jazz and gypsy music. This unique musical style was conceived and broadcast around the world thanks to the genius of Django Reinhardt, one of the best guitarists of the 20th century.

The 4 piece released an album in 2007 which was well received by the public and press alike. Their up-tempo Gypsy Jazz Music has seen them become in huge demand with corporate events, private parties and weddings throughout France.