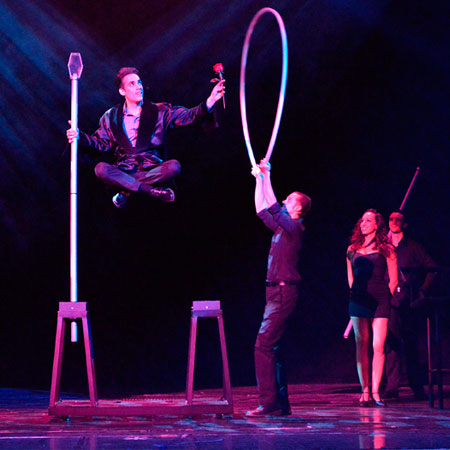 REASONS TO BOOK
Michael Grandinetti is a talented illusionist with a unique and compelling style, as seen on TV
Michael strives to take the art of illusion in new and exciting directions to astonish international audiences
Michael can customise each show to fit any desired theme, message or product and performance lengths can vary from 30 to 90 minutes
Michael has starred in and produced original shows for national and international films and TV
Based in Los Angeles and available to perform at events worldwide, from corporate events to stadium shows
Magic and Illusion, Cabaret and Stage Shows, Magic and Illusion Show, Magic Stage Show, Illusionist

Named by Entertainment Weekly as “a great magician”, Hidden Remote as a “fan favorite" with "charisma and an easy rapport with an audience”, and Digital Journal as “the one to watch in magic in a show that is five out of five stars”, Michael Grandinetti is not your ordinary magician.

With performances on national and international television, in stadiums, arenas, casinos, and theatres around the country, Michael Grandinetti has made a name for himself around the world as a talented entertainer with a unique style, a compelling creative vision, and an engaging personality.

He has been featured on national and international television (NBC's The World's Most Dangerous Magic, CW's Masters of Illusion, POP's Don't Blink, FOX's Bones, The Today Show, Access Hollywood, Entertainment Tonight, and many more), in NFL and NBA halftime shows in the round, with Oscar-winning composers and symphony orchestras, in numerous casino, arena, and theater shows, in national parades, for fairs and festivals, and for Fortune 500, corporate and private events.

Illusionist Michael Grandinetti was honoured to be the first illusionist ever invited to perform in America’s Independence Day Parade in Washington DC. During this national celebration of the country’s history, Michael levitated a girl high above one of the floats as it moved down Constitution Avenue while an audience of 250,000 people lined the streets.

Enjoy an unforgettable time with Master Illusionist Michael Grandinetti as he combines jaw-dropping platform magic with audience participation - creating an interactive experience that pulls you right into the magic.  Live stage effects include borrowed finger rings vanishing and reappearing in a locked glass case, vibrant roses appearing in mid-air from a flash of light, an interactive card trick is performed with the audience using 3ft tall cards, randomly selected audience member's minds are read and one of their thoughts is found written on paper sealed inside a giant balloon and much more.

Guests will also witness several very unique interactive segments of the show where the whole audience participates in magic altogether from their seats!

In this show Michael shrinks a stunning dancer to the size of a basketball, vanishes half of his body, causes an examined piece of tissue paper to come to life and dance in the hands of an audience member, visibly divides himself in half, successfully predicts the winning lottery numbers, gives the entire audience their own private lesson in magic, and for a finale, levitates high above the stage!

" Our members and guests loved your show! We are still basking in the compliments. I want to thank you for astounding and amazing the audience. When we need some more magic, we know who to call on - YOU! "

" Your magic is truly inspiring. You made me believe in anything and everything. I have never been to a magic show before and you made my first show breathtaking. "

" Michael Grandinetti was a huge hit with our audience. The show attracted a large crowd of both adults and children, and Michael captivated them all evening with his magic, humor, and rapport. I highly recommend this show as an excellent addition to any event "

" The show was terrific and a great addition to our awards dinner! We look forward to seeing you again! "

" Michael Grandinetti was phenomenal at The Paramount. He gave them a magic show to remember for a long time. His talent is top notch and his warm and humble personality stands out by a mile. His live magic show at The Paramount earned five out of five stars "