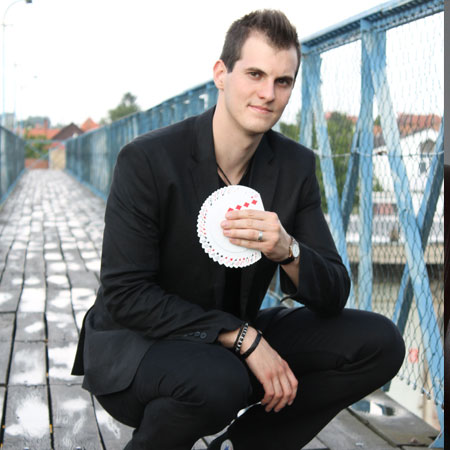 Book close up magicians and magic stage shows for your event from Scarlett Entertainment Hungary.

Based in Budapest and available to perform worldwide, this professional event magician and mentalist aims to recreate the sense of wonderment and receptiveness present in all of us as children. Working as a roaming magician or creating full magic shows, our talented mind magician brings a sense of possibility wherever he goes, do you believe in miracles?

A successful candidate of Hungary’s Got Talent, our memory magician also has been hired to perform his amazing magic productions on cruise ships, at corporate functions, galas, weddings and more.

Performing mentalism, hypnotism, card tricks, sleight of hand and more, our walk around magician will captivate guests as he interacts with them and achieves feats you wouldn’t believe possible. As a stage magician, our mindreader will incorporate the audience into his magic act, wowing spectators with his superhero like abilities.

Using as few props as possible, our memory artist prides his close up magic act on its simplicity. Whether you are looking for a wedding magician to break the ice at your reception with a roaming magic act or a mentalist magician to wow crowds with a sparkling full stage show, this interactive performer is certain to amaze and astound.

For more information about hiring close up magic acts from Scarlett Entertainment, don’t hesitate to contact our knowledgeable team today.