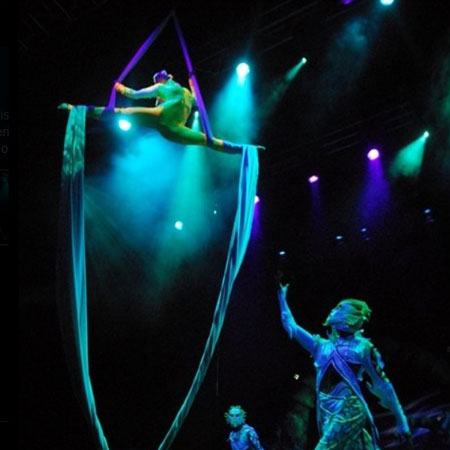 Aerial Silks
Elevated acrobats and contortionists move gracefully at dizzying heights, bending their bodies into the elastic tissues, falling with calculated risk and landing again in the next loop. Aerial Silks is always an astonishing show act that takes audiences breath away every single time. Silks are available in a variety of colours to suit the tone of an event and/or company themes.

Aerial Enchanters
Aerial Enchanters incorporates modern costume design with the latest advances in LED light technology to produce brilliant, high-flying figures that glow from within and will transform their entire colour spectrum in the blink of an eye. The Enchanters had their premiere flying thirty meters above an astonished stadium crowd at the 2008 Dubai World Cup. They can be adapted to fit stilts, a flying harness or both.

Other Aerial Acts
A large repertoire of other possible aerial acts range from solo performances to larger aerial ensembles. Using a wide and versatile variety of innovative aerial equipment, custom built site-specific shows can be designed to suit any event and bring a sense of wonder to audiences on any scale. Their skilled aerial team have experience in rigging counter-balance, aerial stunts, wall-running, bungee, flying foxes and performances from cranes and buildings. Airborne shows require dedicated consultation, location plans and site checks as the safety of all performers is paramount.