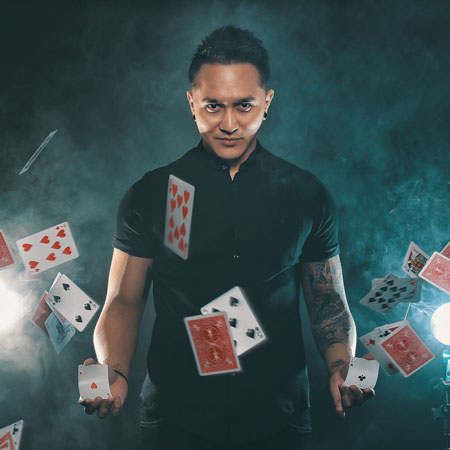 REASONS TO BOOK
Stylish interactive magician capable of delivering exciting close magic to varied audiences
Bookable as a walkabout magician or for interactive stage based show with guests participation
Quarterfinalist of America's Got Talent as well as entering several other competitions
Able to fully customise his magic act to suit the client needs, for maximum impact
Based in Jakarta, Indonesia, and available to perform magic shows all over the world
Close up Magician, Walkabout Entertainment, Illusionist, Magic and Illusion

Our incredibly stylish Jakarta Interactive Magician is rapidly becoming one his country’s very best entertainers. His good looks and charming character give him a universal appeal and an ability to engage with a wide range of people when conducting his impressive close up magic tricks. The Indonesian magician found fame as a quarterfinalist of America's Got Talent as well as entering several other competitions.

Specialising in high-end stage-based illusions and escapology, our Jakarta Interactive Magician loves to engage with members of the audience as well as performing close up magic with strangers. This makes him an ideal walkabout magician for public and corporate events. The Indonesian magician can also provide stage shows that include lots of audience participation.

The Indonesian magician began learning magic at just 10 years old and has throughout his career had and host several national  TV shows, before moving into big stage magic shows and incredible illusions. Aside from his impressive close up magic, this young Indonesian magician is a rising star who has achieved some incredible magical feats that place him alongside some of the greats. These include being buried in cement for 50 hours before breaking free, surviving in a crate of ice for 7 hours as well as teleporting an 8 metre ball and 7 people from the audience from Jakarta to Bandung.

The walkabout magician is able to fully customise his magic act to suit the client needs for maximum impact. Don't hesitate to speak to our team at Scarlett Entertainment to find out about booking the fantastic Jakarta Interactive Magician.