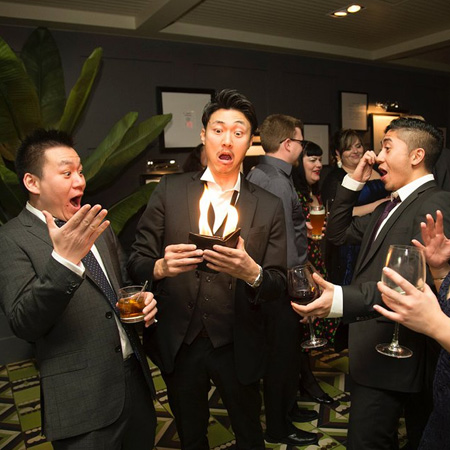 REASONS TO BOOK
One of the most entertaining, funny & magical performers you will ever see
2nd place & People's Choice Award at the Society of American Magicians
Equally at home performing on stage & close up magic
Previous clients incl Imperial Oil & Canadian Olympic Hockey team
Based in Calgary, Canada & available to perform at events worldwide
Magic and Illusion, Magic Stage Show, Close up Magician, Magicians and Mind Readers, Walkabout Entertainment

This award winning Japanese magician has been performing as a professional since 2005.  Our magician makes sure every event is different and unique, and will work to customize the show to your specific needs.

Looking to broaden his horizons, in 2008 he moved to Canada and began creating a series of original acts.  In 2009, the act he created earned him 2nd place and the People's Choice Award at the Society of American Magicians (SAM) in Buffalo, NY, and the People's Choice Award at the convention of the International Brotherhood of Magicians (IBM - the world's largest magical arts organization) in Nashville, Tennessee.

In 2010, he was invited to perform at the most renowned FFFF convention (Fecher's Finger Flicking Frolic), the most prestigious gathering of close-up magicians in the world.

He now resides in Canada and performs in Canada, the United States, and Japan. His relaxed charm, sense of humour and creative approach to performing have made him a popular magician and entertainer who is equally at home performing on stage at large events and up close for small groups.

" I just wanted to thank you for your great performance at the Firemaster Oilfield Services annual Chinese New Year’s event. It was enjoyed by all our guests and it was something that they talked about for weeks afterwards. They especially liked your table performances where you went to each table to perform.Again thank you for helping to make our event this year a great success.See you next year. "

" I saw [Him] perform in a restaurant, and when it came time to look for entertainment for our event he quickly came to mind. I’ll admit that some people were not sold on the idea of a Magician for an engagement party event, but from what I originally saw I knew he would be a crowd favorite…and he was! ﻿If you’re ever looking for a unique and highly entertaining performance for any of your events, I’d certainly recommend giving him a call. He can customize his performance to fit a variety of circumstances, from staged events to crowd mingling magic (which is what he did for us), he’ll work with you to do what works best for your event! "

" Unbelievable! [He] will defy your senses and leave you questioning reality..He is INSANE!!” “That was ridiculous!” What amazing talent and performance. Worth every dollar and them some – hey – where did my wallet go? "