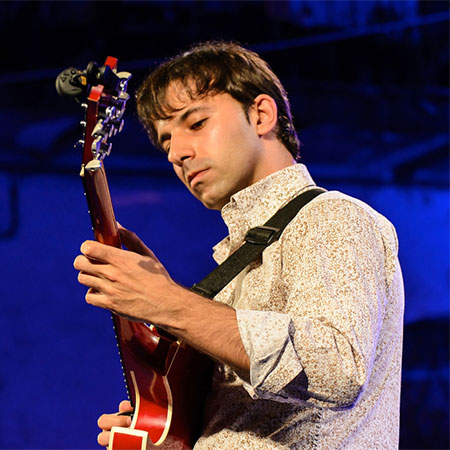 REASONS TO BOOK
Multi-award winning guitar player who can perform both as a leader and as a sideman
Can carry out live jazz performances alongside a four-piece band of renowned jazz musicians
Have recorded music with big names in jazz such as Dave Liebman, Antonio Farao and Rick Stone
Wide repertoire includes popular jazz and swing hits and also original songs by artist
Book this Jazz Guitarist for events in New York and around the world
Live Music and DJ, Jazz,Swing,Blues and Jive, Electric Strings

Experience, style and class define this Jazz Guitarist based in New York. Our talented guitar player offer live jazz performances usually accompanied by a four-piece band of renowned jazz musicians. He’s a multi-award winning guitarist that will make audiences vibrate with his electric guitar riffs and their energy-filled shows.

This Jazz Guitarist currently established in New York is originally from Italy, where he developed a great part of his professional career. Our multi-award winning guitarist recently moved to the US in search of new challenges and where he’s combining his career as a live musician with his work a music educator.

Backed by more than 15 years of experience, this talented guitar player has performed at jazz festivals and venues in the US and all across Europe. His demanded live jazz performances have taken him to countries such as Italy, France, Spain, Germany, Switzerland, England, Scotland, Russia and Croatia.

Qualified music critics have praised him for his work as both a leader and a sideman. During his long musical career, he can boast of having recorded with some of the biggest names in jazz such as Dave Liebman, Antonio Farao and Rick Stone, among others.

Our talented guitar player’s style is a combination of jazz in its pure state embracing classical, folk and even Latin sounds. He and his band could play some world-famous jazz songs during their engaging live jazz performances. And the best of all: they could also play their own original songs and any song upon request!

These are happy times for jazz lovers. Make sure you delight them at your upcoming festival or event with this phenomenal Jazz Guitarist, both in New York and anywhere around the world.

Contact our team of entertainment specialists and request further details on our Jazz Guitarist New York.

" He is a great jazz guitarist and composer from Italy. He is a player that has the gift and touch of the real cats, like John Coltrane, Charlie Parker, Bill Evans, Pat Martino... "

" His fame has reached beyond his national borders, as he has recently toured the Europe and received the endorsement of an important instrument firm. His sonority, sharp and aggressive, can be compared to that of John Scofield, and his phrasing is an intimate synthesis of the contemporary evolutions of jazz guitar "

" With his relentless passion, he has already earned some prestigious honors. His style is marked by a good balance between technique and melodic awareness, his touch is confident and expressive "

" He has thrown open the doors of the process to invite you the listener in to experience the entire experience. My hat’s off to him in a big way. Along with his openness, his “no frills” approach greatly appeals to me "

" One of the greatest jazz guitarists and composers. A truly great musician with big ears and a big heart "